Today we were up early and headed downtown for our 9 AM meet for our Game of Thrones tour. We had 51 people on our tour and started out a few minutes late but the tour guide, Moira and driver Philip were fantastic. We drove through Belfast and saw a few of the same sights that we had seen the day before. However, today we were able to understand the tour guide as she explained to us what they were about. We headed out of Belfast along the coast road and we were happy that we were just passengers and not drivers as the bus made its way along the narrow, winding roads.

Our first Game of Thrones (GOT) location that we drove by was Castle Black, home of the Night Watch. Unfortunately, this is not yet open to visitors so we just had to ooh and ahh as we drove past. It is pretty magnificent. Our first actual GOT stop was at Carnlough Harbour. This seaside port is where Arya Stark comes out of the freezing cold water in Braavos after being stabbed a number of times by the Waif.  Interestingly enough, this was also the vacation home of Winston Churchill and during the war he held many of his top secret meetings here. It is also the home to Paddy the Pigeon who was an Irish carrier pigeon awarded the Dickin Medal after being the fastest pigeon to arrive back in England with news of the success of the D-Day invasion.

Our next stop was the Cushendun Caves, tucked away on an elevated beach in the beautiful and tranquil village of Cushendun. This cove in the Stormlands is where the unforgettable scene between Melisandre and Davos takes place. Here she had the shadow baby that ultimately kills Renly. We had a few minutes here to take pictures and even without the GOT connection, it was a beautiful spot.

We stopped for lunch at the coastal, vacation town of Ballycastle. This pretty little town has a core population of about 3000 but during summer months this can soar to 7 – 8000. A few miles down the coast is the Carrick-a-Rede Rope Bridge. This rope bridge connects the mainland to a little island that is used by fishermen. On calm days, you can pay to walk across the bridge to the island. If you recall, I did not do very well with the rope bridges in New Zealand so had absolutely no desire to walk across this one. However, due to high winds, the bridge was closed so I did not have to justify my decision to anyone. However, the views of the rugged coastline from the carpark were magnificent so it was well worth the stop.

The next GOT location stop was Ballintoy Harbour which has served as Pike, the Iron Islands and part of Dragonstone. Five different episodes were filmed here from Theon’s return to the drowning and rebirth of Euron. It is one of the most picturesque parts of Northern Ireland and looks out to Rathlin Island and on a clear day, you can see Scotland.

The Giant’s Causeway is one of the Natural Wonders of the World, one of Ireland’s prized treasures and was our next stop on the tour. The tops of the columns form stepping stones that lead from the cliff foot and disappear under the sea.  Most of the columns are hexagonal, although there are also some with four, five, seven or eight sides. The tallest are about 12 metres (39 ft) high, and the solidified lava in the cliffs is 28 metres (92 ft) thick in places. Interestingly enough, there are identical steps across the sea in Scotland. This leads to the legend that the Irish Giant Fionn MacCool was challenged to a fight by the Scottish giant Benandonner. Fionn accepted the challenge and built the causeway across the North Channel so that the two giants could meet. In one version of the story, Fionn hides from Benandonner when he realises that his foe is much bigger than he is. Fionn’s wife, Oonagh, disguises Fionn as a baby and tucks him in a cradle. When Benandonner sees the size of the ‘baby’, he reckons that its father, Fionn, must be a giant among giants. He flees back to Scotland in fright, destroying the causeway behind him so that Fionn would be unable to chase him down. As our tour guide says “why ruin a perfectly good story with facts?”

Our last stop of the tour was The Dark Hedges. This beautiful avenue of Beech trees planted in the 18th century serves as the backdrop for the portion of the King’s Road where Arya Stark makes her escape from King’s Landing. So cool!!

And then we headed back to Belfast. As we have mentioned many times in this blog, it is the people that make this journey interesting. On the tour we met a young couple from the Philippines. Joaquin Pedro, JP for short,  is touring with the cast of The King and I and they are currently performing in Dublin. After some discussion, it was decided that we will be seeing his afternoon show on Thursday. How cool is that!?!? Very excited!!

Today we head out to Dublin for our last four days. We are very excited about coming home but sad that this incredible journey is coming to an end. It has literally been, “The Trip of a Lifetime”.

The wall at Castle Black. 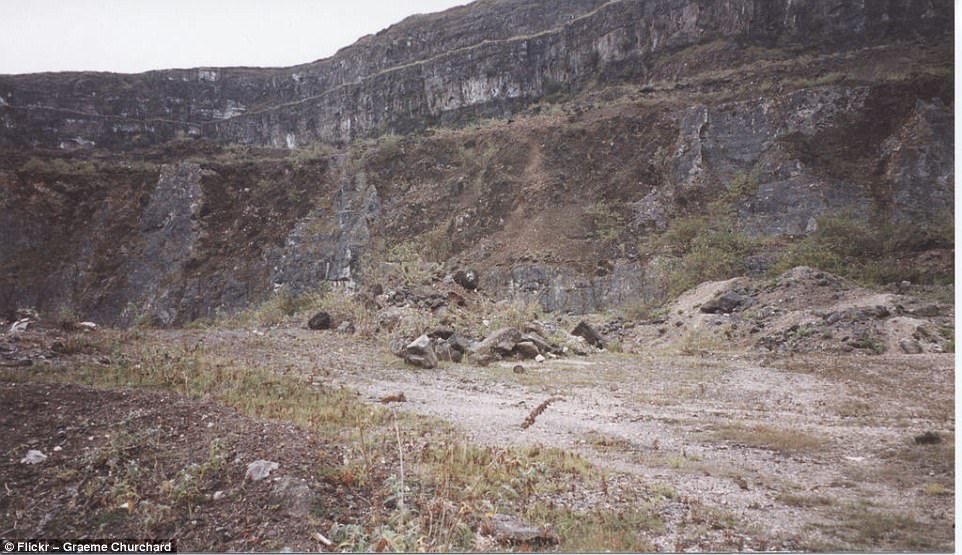 Col is standing on the spot where she was coming out of the water.

No Col, don’t go in that cave. 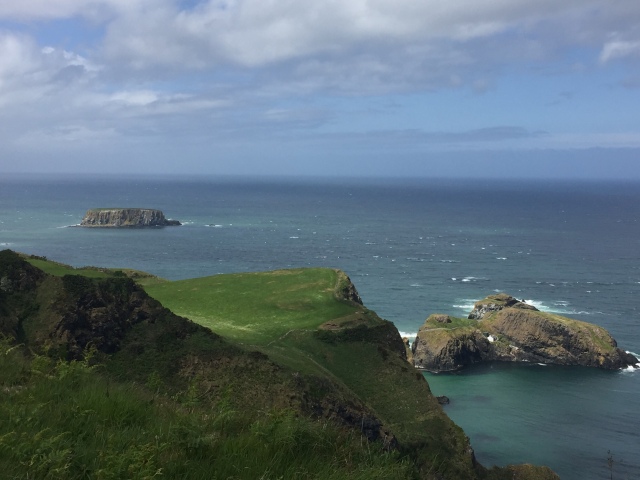 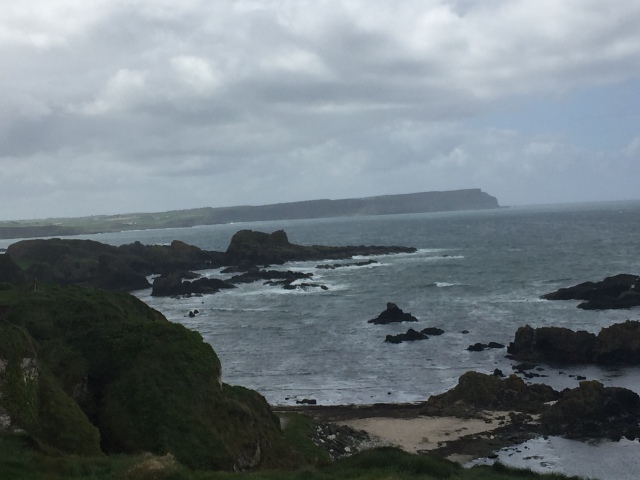 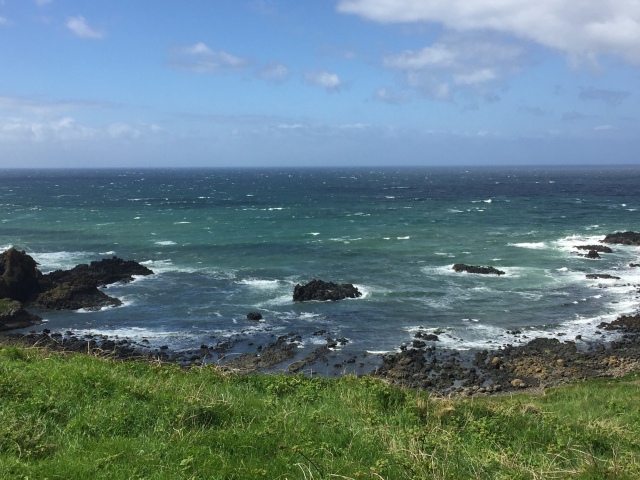 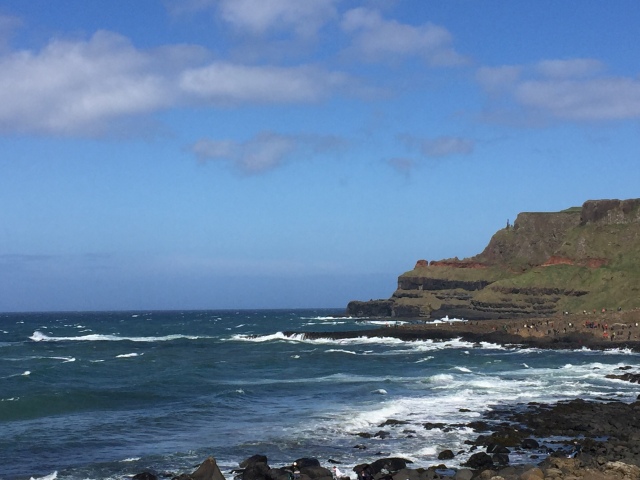 King’s Road… Yeah I know it looks better in the series.