Today we walked on Hadrian’s Wall! Built by the Romans in AD122, this 84 mile defensive fortification spanned the northern limits of the Roman Empire and ran from the North Sea to the Irish Sea. Hadrian, the emperor of Rome, decided that there was no value in pushing the territory any further north and had the wall designed to repel attacks from the northern tribes. It was built by Roman soldiers in a span of about eight years and it is believed that they used very little local labor. The original design had lookout turrets every few miles along the wall. However, a few years into construction, Hadrian decided that forts should also be built into the wall. Many portions of the wall had to be torn down and rebuilt to accommodate the new design. As the years went by, many soldiers were called back to Rome due to an ever increasing threat to the city. Most did not return to Britain. The forts and the wall were completely abandoned by the Romans around AD410. In the years that followed, much of the structure fell to ruin or the stone was pilfered for other construction projects. Today, a number of the fort ruins and portions of the wall have been excavated and are open for visitors to explore. The Hadrian’s Wall Pathway is a walking trail that runs along the entire length of the wall. So, if you have five to seven days of free time, this is a fun thing to do. Unfortunately, we do not have that kind of time at this point of our journey, but we were able to walk on the wall for about a kilometer. It is pretty amazing to think that this structure, built 1900 years ago, has stood the test of time. We visited two forts and it should be noted that the views from them were fantastic. Beautiful countryside – both north and south.

Following our walk back in time, we headed home for supper and reflected on another perfect day in England. Tomorrow we cross the border and head up to Edinburgh, Scotland. I wonder what kind of adventures we’ll find there.

PS. I probably do not thank you, our friends and readers, nearly enough for your support. It is always great getting feedback on something I’ve written or pictures that Richard has posted. We got two comments on our Lake District blog that I would like to pass along. The cattle with the bangs are most likely Highland cattle and the stone fences are called Dry Stone Walls. Thank you Cathy and Janet for that information. We appreciate it! 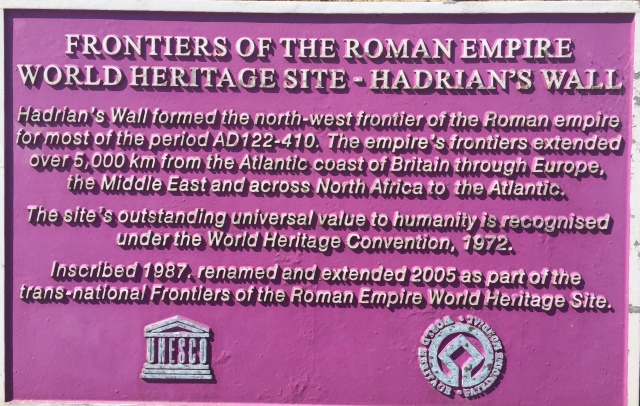 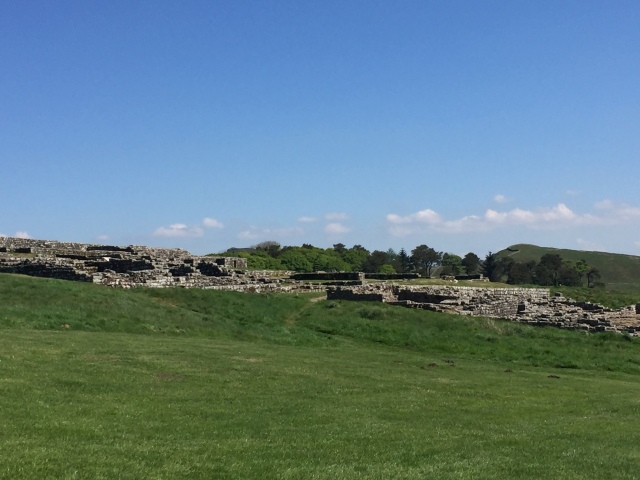 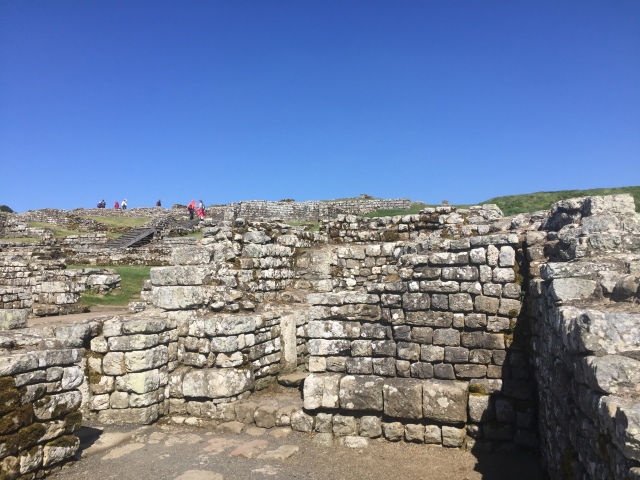 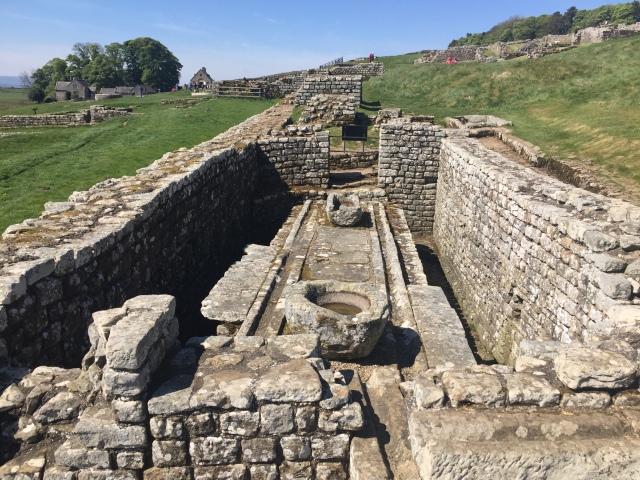 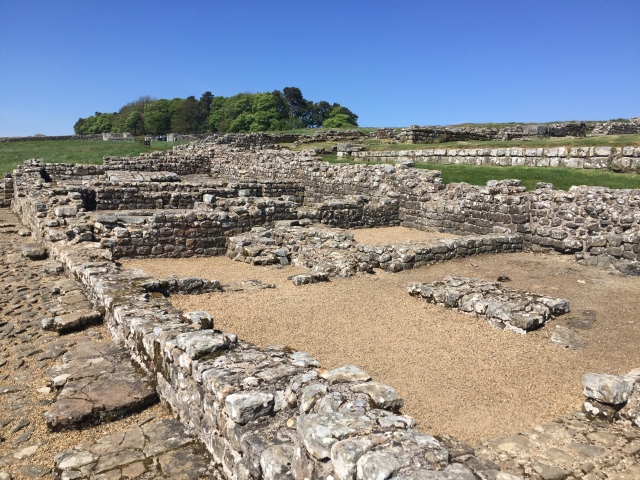 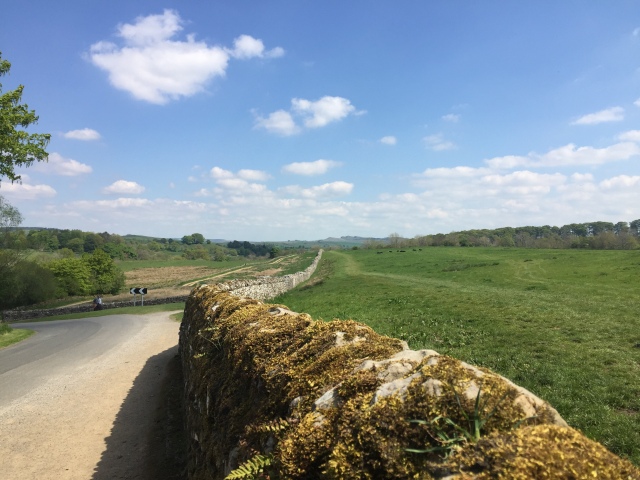 Col looking over the Northern frontier checking for Barbarians. 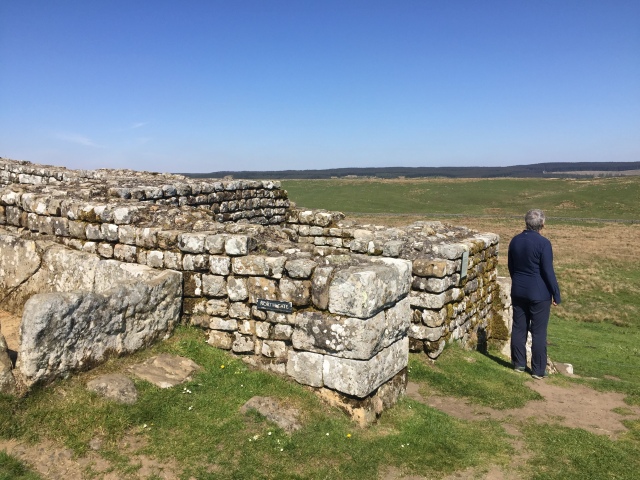 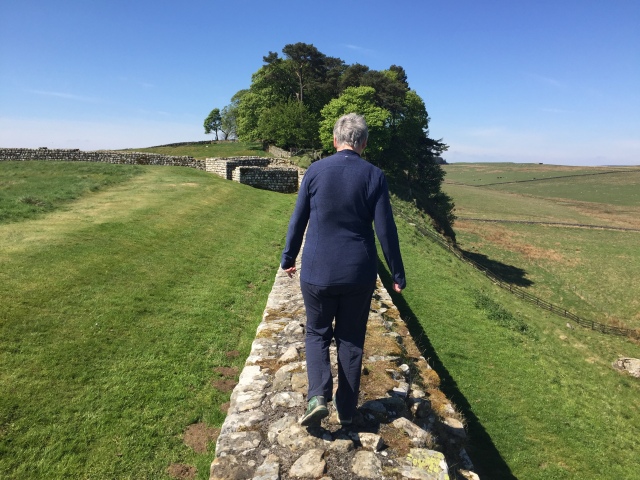 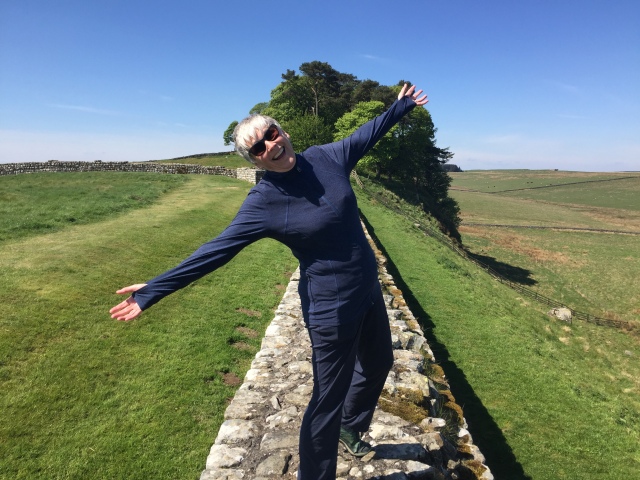 We packed the car and sadly said goodbye to our hosts in Wales and headed north towards Scotland. Though we were excited for the rest of our journey, I couldn’t help but think that I had left a little piece of myself in the beautiful hills around Welshpool. I can understand why my Gran always spoke of this place with so much reverence.

The three and a half hour drive turned into about six as we decided to take a detour and have lunch in the Lake District. I have read many novels that have their setting at this area and I wanted to see for myself if it is as beautiful as I have read. What we noticed first of all was the stone fences. You may recall that the fences in England and Wales were thick hedges at about shoulder height. As we entered the Lake District, the fences were all stone – along the road, though the pastures and fields and around the houses. It was absolutely amazing!! Richard had picked a spot for lunch called the Drunken Duck and the winding road took us through the countryside filled with sheep, through a number of small touristy, villages and past some pretty magnificent homes along the lake. The Drunken Duck is known for its views and we weren’t disappointed. The sky was clear, the sun was shining and we could see for miles. The waiter told us that we were very lucky as most of the time it is raining and you can’t really see anything for the clouds. We had a fairly basic lunch, walked a bit to stretch our legs and got back in the car for the rest of our journey. Richard was driving now and rather than go back out the way we came in, we decided to just keep driving north. Though the road got even more narrow, windy and hilly, the scenery was fantastic! Cute, little bungalows. Rocky hillsides. Green pastures. Beautiful valleys. Large lakes. Thousands of sheep. Even a pasture of long, horn cattle with bangs!! And all of this scenery encompassed within those magnificent stone fences. We stopped a couple of times to take pictures and though we will post some, I am sure that they will not do them justice. We both agreed that the scenery was well worth the nerve wracking drive!!

We arrived at our BNB in Carlisle, England about 4 PM. We settled in, went for a walk to get a few groceries and hunkered in for the night. We are about a half hour drive from Hadrian’s Wall and plan on a fairly long day tomorrow as we explore this historic Roman architecture.  Another amazing day in jolly Old England!!

The Drunken Duck and the views from where we ate. 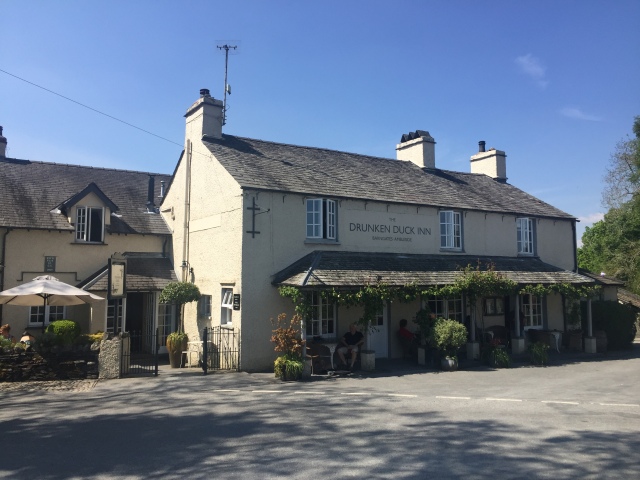 The winding road out of the Lake District.

I am not too proud to say it was a bit of a nail biter.  The going was slow due to the narrowness of the road and a lot of it was lined with the stone fences which were sometimes inches from the car.  I was quite happy to get back on the motorway. 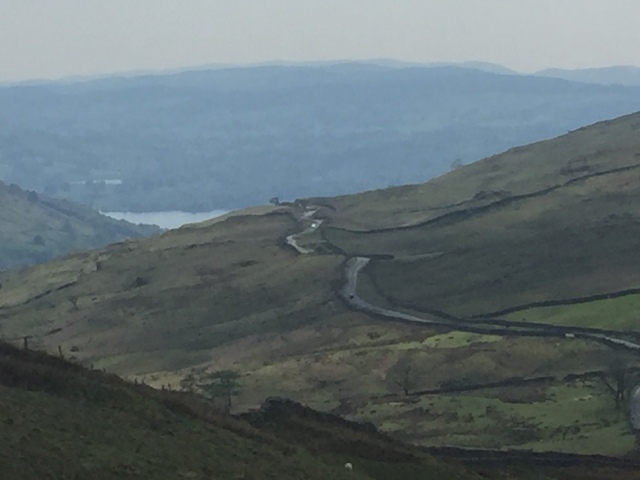 The black lines in the field below are the rock fences.