We walked about a half mile this morning to attend mass at St. Mary’s Catholic Church. This lovely Neo Gothic Church was built in 1863 and though it is smaller than many of the churches that we viewed in Europe, it was still very beautiful. The mass was lively, the priest dynamic and the fact that it was our first English mass in months inspired us for the rest of the day.

We went home for a breakfast of fried egg sandwiches with ham and cheese and after Richard almost set the apartment on fire by leaving the egg carton on the stove, we headed out to the pub. The Oval, the local pub, has jazz at  1PM on Sundays. The place was packed with jazz lovers and beer lovers and we sat at the bar and took in the atmosphere. Richard has a few pictures and videos that will tell a much better story than I ever could.

We spent a couple of hours at the pub and then decided that we should probably get some laundry done. This is the first time that we have ever had to use a laundromat during our entire trip. Most of the BNB’s have had some sort of laundry facility. It was a great experience though because we had a nice chat with the woman that manages the place. Again, we received some great tips of places to see and best of all, places to eat – as if we need help in that department!!

Summing up the day – Church, eat, pub, drink, laundry, eat. Sounds like a perfect Sunday to me. And what did you do today?

First things first.  Col forgot to mention that Sunday in England is “Sunday Roast” at the pubs and restaurants.  We were hoping reserve a table at the Oval for tonight, but the bartender said that they only have a limited amount of roasts for the day and they would be sold out by then.  Oh well, will sample some up North or in Wales.  Apparently Roast Sunday is better up North anyway as that it where the tradition started. Below is a picture of what the Roast Sunday dinner looked like at the Oval. 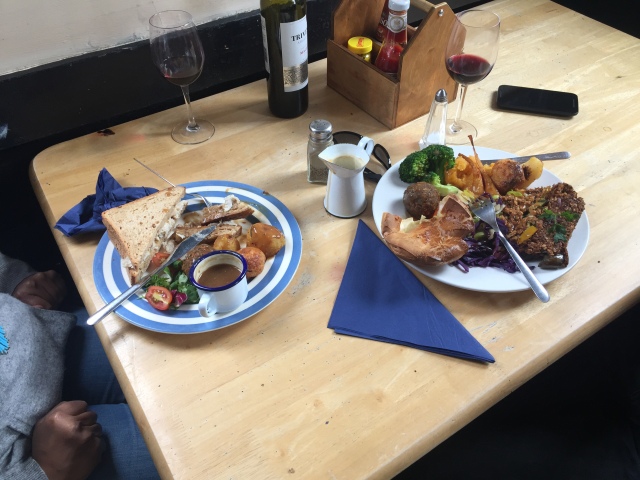 I have never seen beer dispensed like this, so I took a video and of course I had to try one.