On Sunday we left the safety and security of our B&B for a leisurely walk to the Caen Memorial.  The memorial is home to the Caen museum which many regard as the finest WWII museum in France and it is also home to the Canadian, American and British honour gardens.  Also on site is the genuine command post bunker that the Germans used for coordinating their defence of Normandy. We did not visit many tourist places while in Caen as we used it as our base camp for visiting the memorial sites in Normandy.

On the grounds of the museum there is one of 16 copies of the famous Non-Violence sculpture, also known as The Knotted Gun by Swedish artist Carl Fredrik Reuterswärd. The sculpture depicts an 5′ long by 2.5′ high Colt Python .357 Magnum revolver with a the barrel knotted and pointing upwards. the sculpture rests on a 1′ high bronze plinth which rests on a 4′ high by 6′ long by 3′ wide by rectangular stone base.  A small plaque on the front of the base is inscribed:

Below is the large granite slab with the Latin inscription:

No Day Will Ever Erase You From The Memory Of Time. 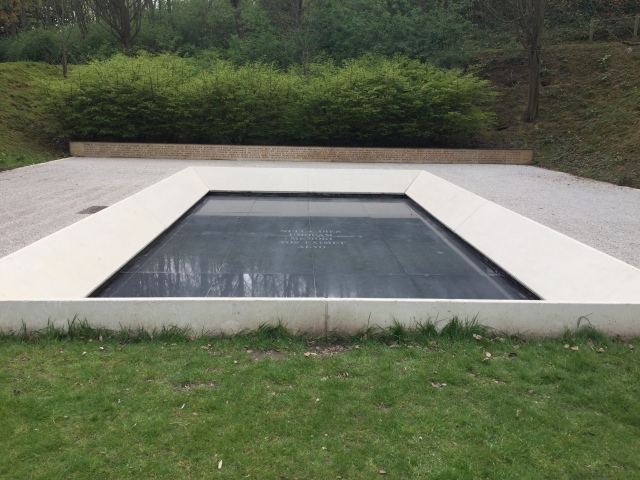 The American garden has a memorial wall with plaques from all 50 states along with messages from some American territories.  Among them we found one which we thought to be unique.  It was from the State of Pennsylvania and has a piece of Granite from the Gettysburg Battlefield.

The bunker for the German command post was a very interesting visit.  Unfortunately the lighting in the bunker was not very good for pictures.