After our long, emotional day yesterday, we thought that we would take it a little easier today. We decided to head for the coast and check out Calais and Dunkirk. It was a nice hour and half drive through the beautiful French countryside. We got excited to see the exit for the chunnel to England and thought that maybe we would just pop over and back just for fun. However, after looking into it a bit, we decided that it was probably pretty silly and quite expensive. So, we continued on a couple of miles past Calais to Saint-Inglevert. The Calais Canadian War Cemetery contains 704 Commonwealth burials of the Second World War, 30 of them unidentified. There are also seven Czech and 19 Polish war graves. It was humbling seeing so many Maple Leafs on the tombstones – many from the Royal Winnipeg Rifles. The men were so young, some only 19 and 20.  It seems such a waste.

We wandered around there for about a half hour and then made our way back towards Dunkirk. We parked near the pier and walked along the wide expanse of beach. Though the day was windy and fairly chilly, it was great to be near the water again. We watched the waves roll in from the English Channel as the wind played havoc with the sand and sea. We walked to the end of the beach and after skirting around some construction found the memorial from Operation Dynamo. With a combination of hard fighting and German indecision, the port of Dunkirk was kept open allowing 338,000 Allied troops to be evacuated.  If you haven’t already, a must see is the movie Dunkirk which portrays this 1940 operation.

We considered the day complete and headed back to the car and our temporary home in Lille. Tomorrow we pack up again and drive down to Caen, stopping along the way at Vimy Ridge, The Beaumont – Hamel Newfoundland Memorial and Dieppe. Another emotional day I am sure.

As Col had mentioned there were a lot of Royal Winnipeg Rifle inscriptions on the grave stones which made us feel very connected.

The google translation for below is:  To the glorious memory of the naval airmen and soldiers of the Frankish and Allied armies who sacrificed themselves in the battle of Dunkirk May June 1940

On the  lighter side here is Col posing by the Old Fashioned change rooms on the Dunkirk beach.

Our Toyota Hybrid which has been getting us around to the memorial sites.  A big shout out to my wife who has been doing all the driving and has already taken me to some memorials I had not even thought of.  Good job honey!!!

Today we picked up our car rental in Lille, France and headed back in to Belgium to see some World War I Canadian Memorial sites in and around the town of Ypres (now called Ieper). Flanders Fields is the name given to the battlegrounds located around this area.

We basically did a loop around a number of battlefields and Canadian memorials, stopping at each one to take pictures, read the story boards and contemplate the lives of the men that faced the horror of war every day. We made our way to Hill 62 and Sanctuary Wood (a memorial commemorating the actions of the Canadian Corps in defending the southern stretches of the Ypres Salient between April and August 1916), Tyne Cot Cemetery (the largest Commonwealth cemetery in the world), Passchendaele (where Canadian soldiers fought in the mud for months to regain the town), St. Julien and the Brooding Soldier, Essex Farm Cemetery (where Canadian John McCrae wrote the poem “In Flanders Fields” and then on to Ypres where we finished off the day with “The Last Post”.  Every day since 1927 and the opening of the Menin Memorial Gate into Ypres, this moving tribute to all the fallen soldiers is given at 8 PM. Every day the road is closed and people gather from all around the world to pay their respects and listen as the haunting sound of “The Last Post” is played. Every day people weep for family members that they never knew and every day we are blessed that these people made the sacrifices that they did.

It was an emotional day but we also could not stop admiring the beauty of this part of the world. The houses are quaint. The farms are neat and tidy. The landscape is so green with horses and cattle everywhere. So peaceful.

Hill 62 (Sanctuary Wood) Canadian Memorial is a block of white Quebec granite weighing almost 15 tonnes, set in a large circle of green lawn at the top of three landscaped terraces, each ablaze with solid beds of roses in season. It bears the inscription:

HERE AT MOUNT SORREL ON THE LINE FROM HOOGE TO ST. ELOI, THE CANADIAN CORPS FOUGHT IN THE DEFENSE OF YPRES APRIL – AUGUST 1916

From the top of the steps leading up to the Hill 62 (Sanctuary Wood) Canadian Memorial,  looking down past Sanctuary Wood and Maple Copse along the broad spur of Observatory Ridge, you can see the church towers of Ypres, five kilometres to the west. A great many of the Canadian headstones in the Maple Copse and Hooge Crater Cemeteries nearby bear a date in June 1916.

Colleen signing the guest registry.  We signed as many as were available.

The Tyne Cot Cemetery is now the resting-place of nearly 12,000 soldiers of the Commonwealth Forces, the largest number of burials of any Commonwealth cemetery of either world war. It first came into being in October 1917 when one of the captured pillboxes was used as an Advanced Dressing Station, resulting in some 350 burials between then and the end of March 1918. The cemetery was much enlarged after the Armistice by more than 11,500 graves from the battlefields of Passchendaele and Langemarck and from a few small burial grounds. The dates of death cover the four years from October 1914 to September 1918 inclusive. Unnamed graves in the cemetery number nearly 8,400, or 70% of the total, and the names of the unidentified soldiers who lie in them are inscribed on the Menin Gate in Ypres and on the panels of the Memorial which stands to the rear of this cemetery.

The site of the Memorial is on the high ground of the western slopes of the Passchendaele Ridge. It is in the middle of an agricultural district, with widely scattered farms and small villages. It represents the most desperate offensive fighting and stubborn resistance of the Commonwealth Armies in Belgium.  It is the farthest point in Belgium reached by Commonwealth arms in the First World War until the final advance to victory.

As we traveled through the Flanders area today we experienced some of the most beautiful land we have seen for a while.  It stands in stark contrast to the devastation that took place all around it.

We stopped for lunch in a town called Zonnebeke which is near Passchendaele and these young people came marching by dressed in WW1 fatigues.

On the slopes overlooking the peaceful fields that today carpet the valley of the Ravebeek, this Canadian Battlefield Memorial marks the site of Crest Farm, where Canadian soldiers encountered some of the fiercest resistance they were to meet during the war. A large block of Canadian granite set in a grove of maple trees and encircled with a low hedge of holly carries the inscription:

THE CANADIAN CORPS IN OCT.- NOV. 1917 ADVANCED ACROSS THIS VALLEY – THEN A TREACHEROUS MORASS – CAPTURED AND HELD THE PASSCHENDAELE RIDGE.

When Passchendaele was rebuilt, a new road was constructed that ran straight from the the center of the town to the Canadian memorial site. The road is called Canada Lane.

What the town of Passchendaele looked like after the war.  Like many towns in the area it was completely destroyed.

The houses are so cute and quaint in the Flanders area. Here’s an example:

Visible for several miles from its site beside the main road from Ypres to Bruges, the impressive Canadian Memorial at St. Julien stands like a sentinel over those who died during the heroic stand of Canadians during the first gas attacks of the First World War.

It is one of the most striking of all the battlefield memorials on the Western Front. Rising almost 11 metres from a stone-flagged court, “The Brooding Soldier” surmounts a single shaft of granite – the bowed head and shoulders of a Canadian soldier with folded hands resting on arms reversed. The expression on the face beneath the steel helmet is resolute yet sympathetic, as though its owner meditates on the battle in which his comrades displayed such great valour. The statue is set in the middle of a garden surrounded by tall cedars, which are kept trimmed to perfect cones to match and complement the towering granite shaft.

The inscription on the Memorial recalls the Canadian participation in the Second Battle of Ypres:

THIS COLUMN MARKS THE BATTLEFIELD WHERE 18,000 CANADIANS ON THE BRITISH LEFT WITHSTOOD THE FIRST GERMAN GAS ATTACKS THE 22ND-24TH OF APRIL 1915. 2,000 FELL AND HERE LIE BURIED 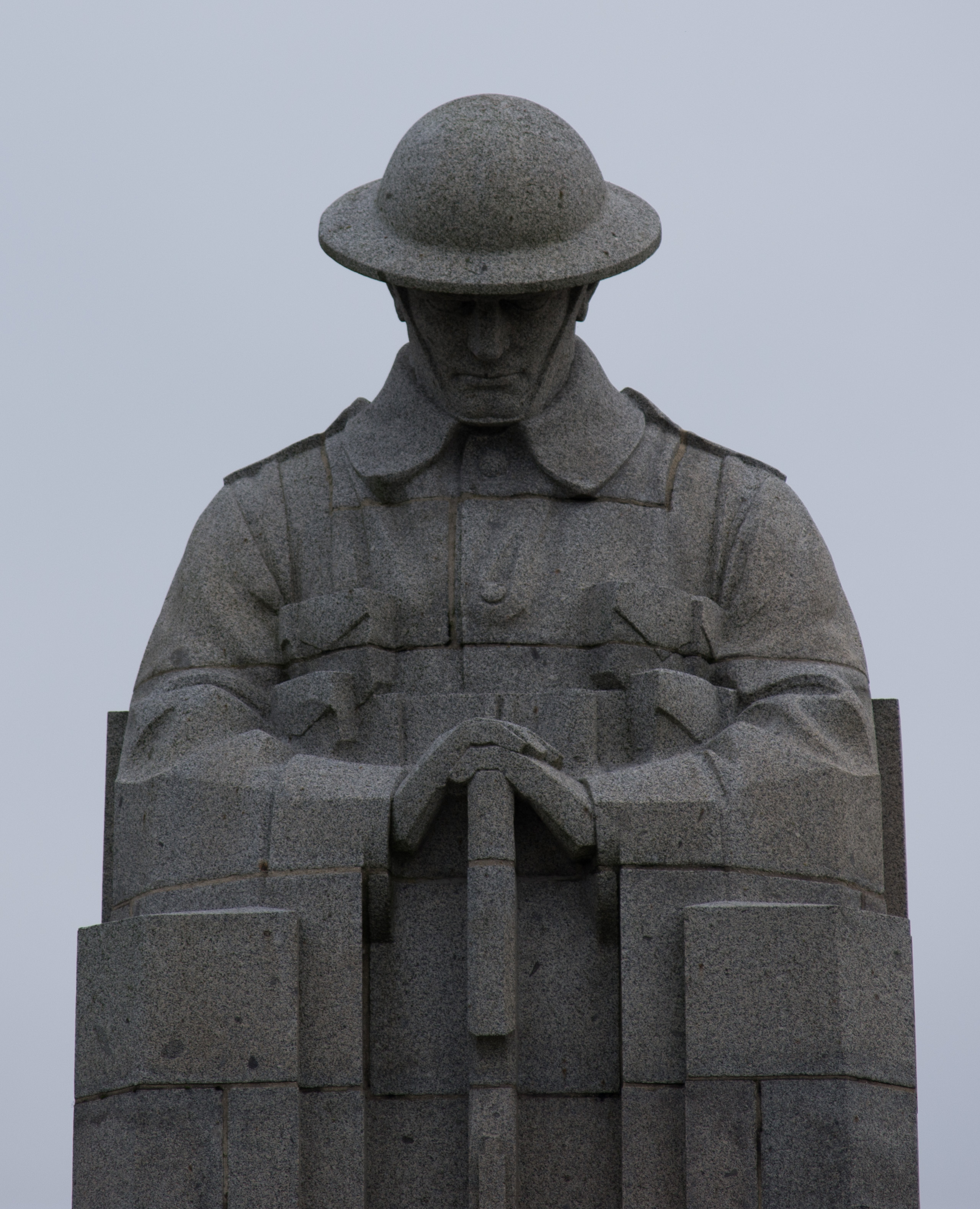 There are 1,200 WWI servicemen buried or commemorated in this cemetery. Of these burials 103 are not identified. There are special memorials commemorating 19 casualties who are known or believed to be buried among the unidentified burials.

The bunkers of Essex Farm ran along the canal. Across the canal, German combatants huddled in their bunkers as the two sides fired at each other.

Essex Farm Cemetery is probably one of the most visited sites in the Salient, and this is principally because of its association with John McCrae. John McCrae was a Canadian, born in Ontario in 1871, who qualified in medicine at Toronto in 1898. He served with the Artillery during the Boer War. From 1901 until 1914, he practiced as a doctor in Canada and in England.

On the outbreak of the First World War, he enlisted within the first few weeks and was sent overseas in September 1914, again with the Canadian Field Artillery. While stationed at Essex Farm, in May 1915 he wrote the famous poem “In Flanders Fields“, after one of his friends, Alexis Helmer, was killed and buried.

Below is a memorial to John McCrae.

Seeing the poppies blow around the graves led to the best known image of this poem. “In Flanders Fields” was published for the first time in Punch in December that year, and has since come to encapsulate the sacrifice of those who fought.

Colleen and I have both read this poem many times, but when you are reading it in the exact location it was written and standing among the many graves of fallen young men it hits you in a way that is difficult to explain. 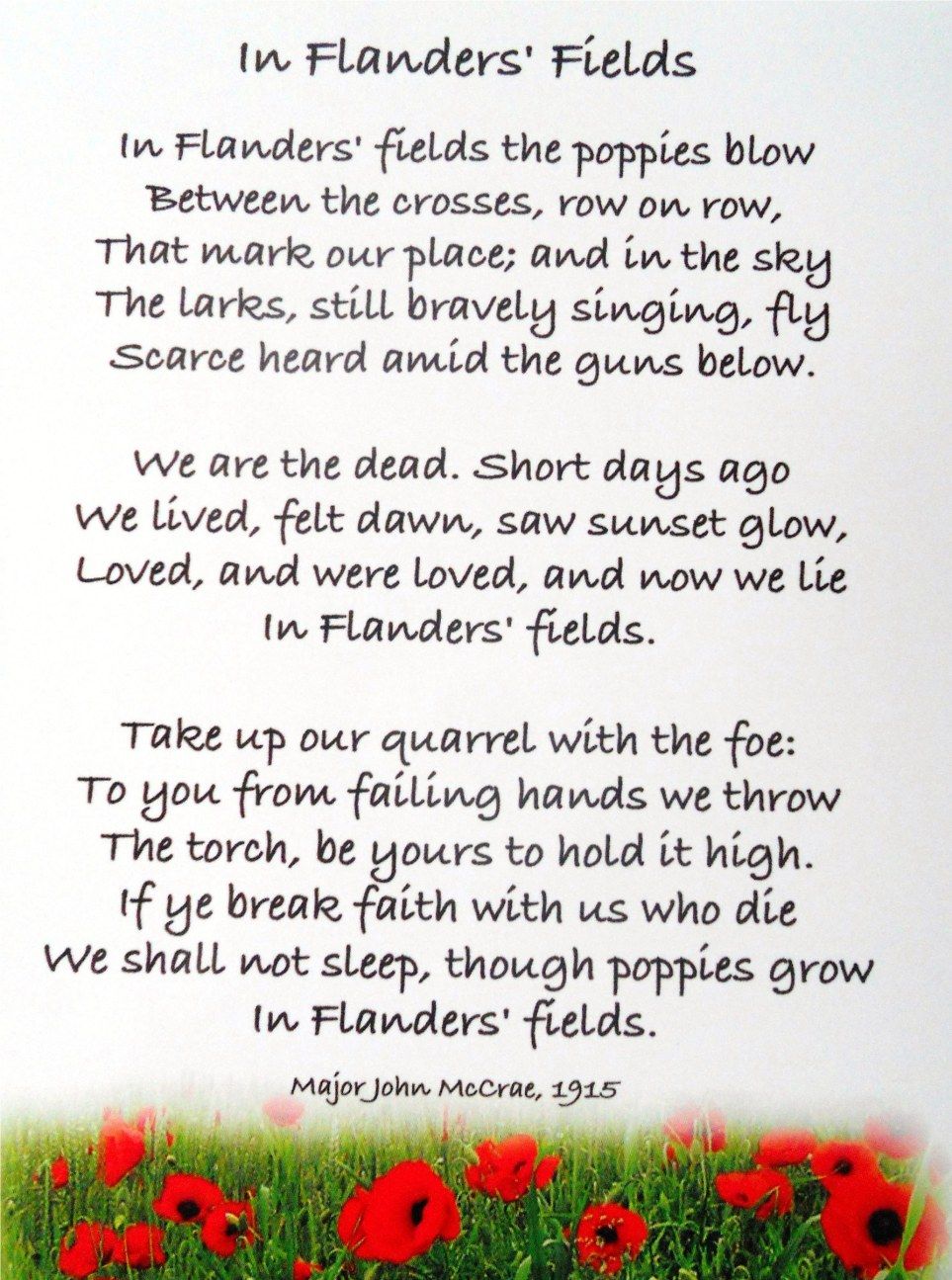 This last picture was taken while standing on one side of the fence of the Essex Cemetery.  So peaceful and again such a contrast to what we were experiencing that day.

Ypres (Ieper) and the Menin Gate.

The names of the Canadian Soldiers who perished defending Ypres.

The Start of the Ceremony.

The young people in red below were part of the choir that took part in the ceremony.  On this occasion it was sponsored by a local school.

The end of the Ceremony.

On a personal note, today was probably the most emotional day I have had so far while on our journey.  The memorials are kept in impeccable shape. They are just beautiful.  So Proud to be a Canadian today.