One of the things I (Richard) really wanted to do while in Western Europe was to visit as many Canadian war memorial sites as I could. First stop, Apeldoorn in the Netherlands. Apeldoorn is host to the Man with two hats.

In the City of Apeldoorn, The Man With Two Hats monument symbolizes many dualities. The two hats in and of themselves represent a time when to come through the war with one hat was something of a feat. It represents the end of the horrors of war but in the same vein the peace and freedom that continue to elude many countries today. It symbolizes the two countries of Canada and the Netherlands. The outstretched arms symbolize the liberation of the Netherlands and also the reaching out of country to country, people to people. The visage, one of sadness and deep meditation and also one of serenity and peace. With the donation of this monument, the Netherlands pays a lasting tribute to Canada. A statue identical to this one stands in Ottawa, Ontario. The twin monuments symbolically link Canada and the Netherlands, forever close friends.

The monument, which was sculpted by Dutch artist Henk Visch, is made of bronze and measures 4.6 metres. Entitled “The Man with Two Hats” (De man met de twee hoeden), it symbolizes the historic bonds between Canada and the Netherlands.

This was just the first of a few Canadian war memorials to come.  I don’t know how my emotions will be as I / we experience these, but I have to say that even today I could feel my emotions coming to the surface.  I am eager to share these with you as we will be continuing our journey through Belgium and France.

The translation of the plaque below reads:  This tree was planted on December 29, 1945 by Lieutenant General G. G. Simonds,  Commander of the Canadian army corps that liberated the Netherlands. At the time I took this picture I didn’t know what the translation was so I didn’t take a picture of the tree.   Trust me, it is a beautiful tree. 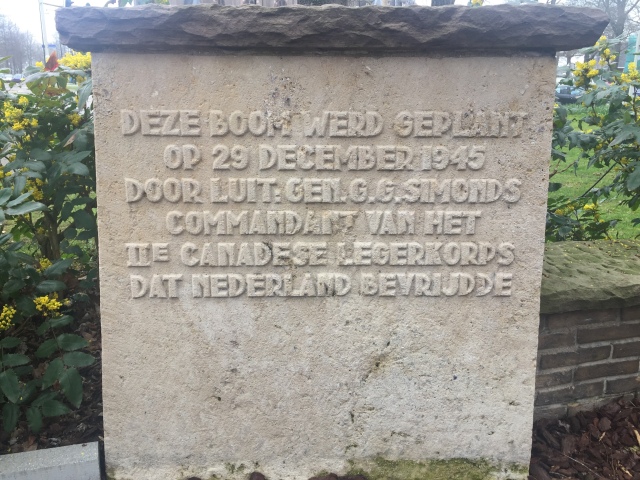 More of the Man With Two Hats. 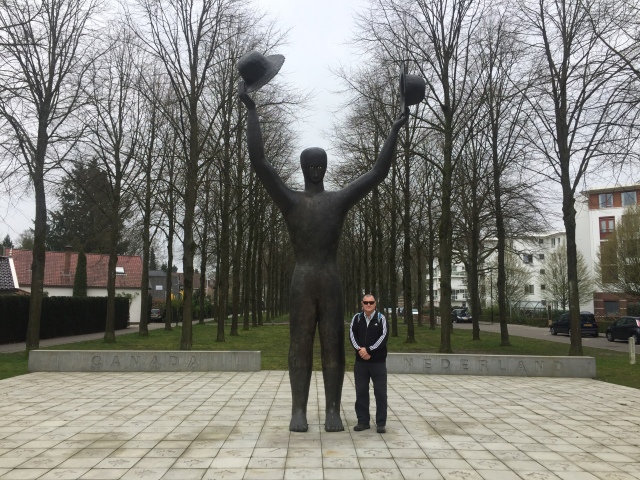 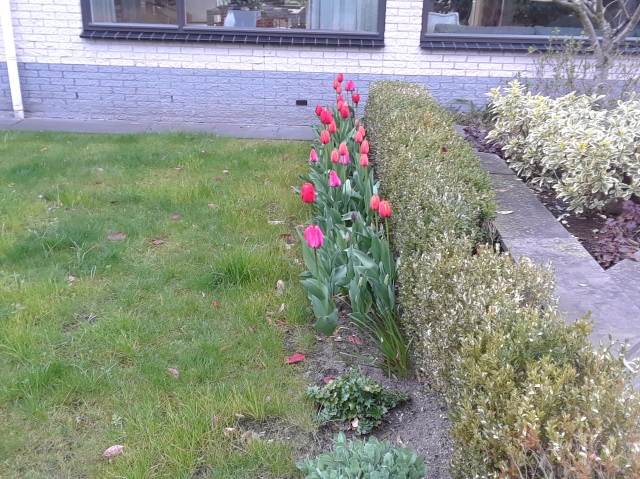 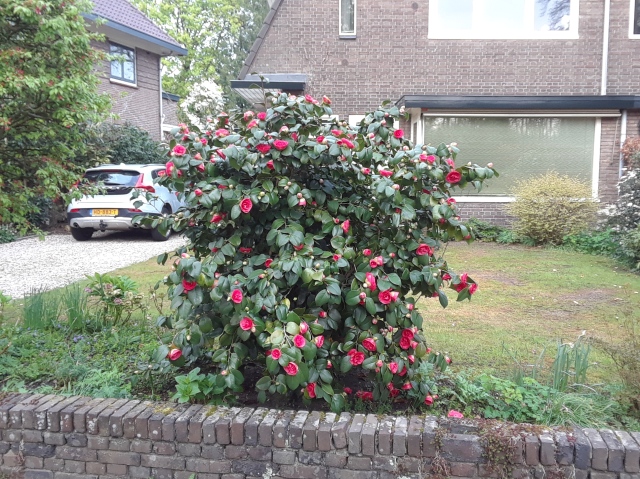 I was not able to attach this to Col’s original Amsterdam post.  It it one of the interactive kiosks we had fun with.  I hope the link below works.

We are staying in the little town of Baarn about an hour’s train ride from Amsterdam. When we arrived from Berlin on Thursday afternoon, we dropped our bags and walked into the downtown for a few groceries and/or a bite to eat. What we found were pretty streets lined with gorgeous homes, some with thatched roofs, and quaint, little shops. We wandered around for a while soaking in the ambience. Richard found a barber so he got a quick haircut. I found several hairdresser shops but all were closed for the day. We settled on getting a few groceries and headed back to our room for the night.

We were up bright and early Friday morning and headed into Amsterdam on the train. What an amazing city! We jumped on a Hop On-Hop Off bus and took the tour around the city. We then hopped onto one of the many boats that make their way around the canals and spent a couple of stress free hours watching the city glide by. As we had no real plans or expectations of the city, we decided to take in a tour of the Heineken museum. This ended up being very informative and a whole lot of fun. The museum is obviously geared towards the younger population with loud music, bright light shows and interactive gadgetry but we enjoyed it a lot. A very pleasant way to spend a couple of hours. We were also hoping to take a tour of the Anne Frank museum but found out when we got there that tickets need to be purchased online, many months in advance. The next available ticket was April 24th so we were SOL for that tour. We hoped to at least take some pictures from outside the building but it has been completely redone and is so modern looking that it does not even fit in with the structures around it. That was probably the most disappointing of all. That, and not being able to get into the Hard Rock Cafe for supper!! LOL!!

We thoroughly enjoyed Amsterdam and though we just walked, rode buses and boats most of the day, we thought that it was very unique and totally worth a visit. We have a free day in Baarn today so may see about checking out some war sites or may just kick back at one of the local pubs and enjoy a relaxing afternoon. Enjoy your weekend!!

You see a few of these along the Dutch countryside

Of course we had to start the day off with a traditional Dutch breakfast. 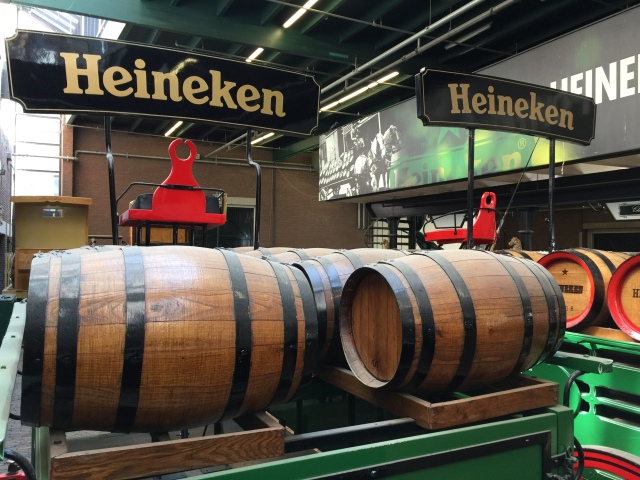 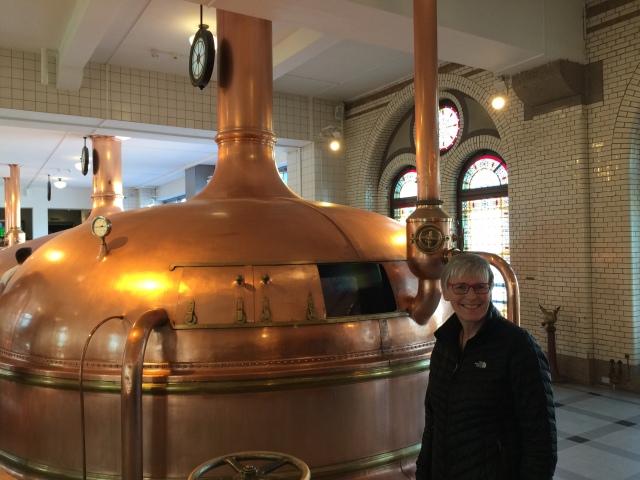 While in Amsterdam keep your head on a swivel and look out for the bikes because there are a million of them and they will run you over before you can blink.  It seems the preferred mode of transportation in the Netherlands is the bicycle.   Below is a couple of pictures of a bike parking lot by the train station and I hope you can get a idea of the size of it.

As Col mentioned we had a boat ride around some of the canals in Amsterdam.  What was interesting was the amount of permanent houseboats on the canals which ranged from run down to the very exquisite. 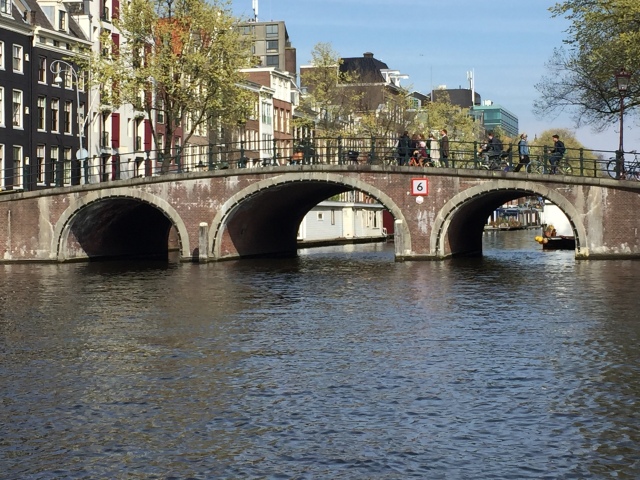 On a personal note (Richard) after visiting both Venice and Amsterdam, both cities with canals, I would recommend Amsterdam over Venice even though the canals of Venice outnumber Amsterdams 50 to 1 or more.  Compared to Venice, Amsterdam is much cleaner, the buildings have been kept up much better and it has a nice vibe.  Also if you are one who feels more comfortable where a lot of English is spoken than Amsterdam also fits that bill.  And that my friends is one man’s opinion.