Today we took the UBahn (fancy name for subway) down to Checkpoint Charlie. This was the best-known border crossing between East and West Berlin during the Cold War, probably because it could only be used by the Allied forces or foreigners. At the height of the Berlin Crisis in 1961 U.S. and Soviet tanks faced each other here. There is a wonderful open air museum along the street chronicling the advent of World War II, the Allied Invasion, the division of Berlin into four quarters, the building of the wall in 1961 following the Berlin Crisis, subsequent riots and peace talks with the eventual result of the wall coming down in 1989.

Though the wall is no longer there, there is a brick trail that has been built into the street that follows the path of the wall. We followed this path from Checkpoint Charlie to the Topography of Terror Museum. This museum is located in the former SS and Gestapo headquarters area and documents the events that took place from 1933 to 1945. It, of course shows the rise of the Nazis, the resulting Holocaust and eventual downfall. Though we have seen much of this information before, we usually always pick up some new fact that we were previously unaware of.

From the Topography of Terror, we followed the wall path past the Memorial for Murdered Jews and on towards the Brandenburg Gate. Apparently there was a “Save the Earth” rally taking place around this area as there were thousands of people on the streets carrying placards. We pushed our way through the crowds until we walked through the famous Gate. This beautiful archway was built in 1791 in the design of the gateway of the Acropolis in Athens. In 1946, with the post-war division of Germany and Berlin, the Brandenburg Gate was in the Soviet sector. When the Berlin Wall went up in 1961, the Gate stood in an exclusion zone in an arc of the Wall, inaccessible for locals and visitors alike. In 1989, when the wall came down, over 100,000 people surged to this gate and the reunification process began to take place.

We walked east along the Unter den Linden towards the centre of Berlin. This area had been almost completely destroyed during the war and once it became part of the Soviet sector, it fell to complete ruin. Since 1990, this area has become the symbol of a reunited Berlin and buildings are being rebuilt and restored. We crossed over Museum Island (literally, this small island oasis is home to four museums) and into Alexanderplatz, the centre of Berlin. Our main concern here was to find the subway back to our apartment so we did not spend much time in the square. This, and surrounding sites, are on our list for another day.

The station here is huge – with trams, Ubahns and Sbahns all coming through. It is interesting to note that during the Cold War, trains would run through this station from one station in the West to another station in the West but would not stop here as it was in the East. As a result, many of these “ghost” stations fell to ruin and needed major repair once the wall came down.

We have so many thoughts and feelings about this period in history that we are having trouble expressing them. We discuss it between ourselves, we watch documentaries and discuss it again. Still, it is hard to come to grips with the horror and sadness of these complicated events. Why didn’t someone stop Hitler? How did the Allies get mixed up with the Soviets? How is it that propaganda and “false news” can change the face of the world? How can world leaders make such bad decisions? Is history repeating itself? These are all questions that back home we wouldn’t have bothered with, but here, they  become so much more relevant.

Today, we are off to the Olympic Stadium and even though there was much politics surrounding the 1936 Olympics, we plan to just enjoy the sport of it all. Wish us luck!! 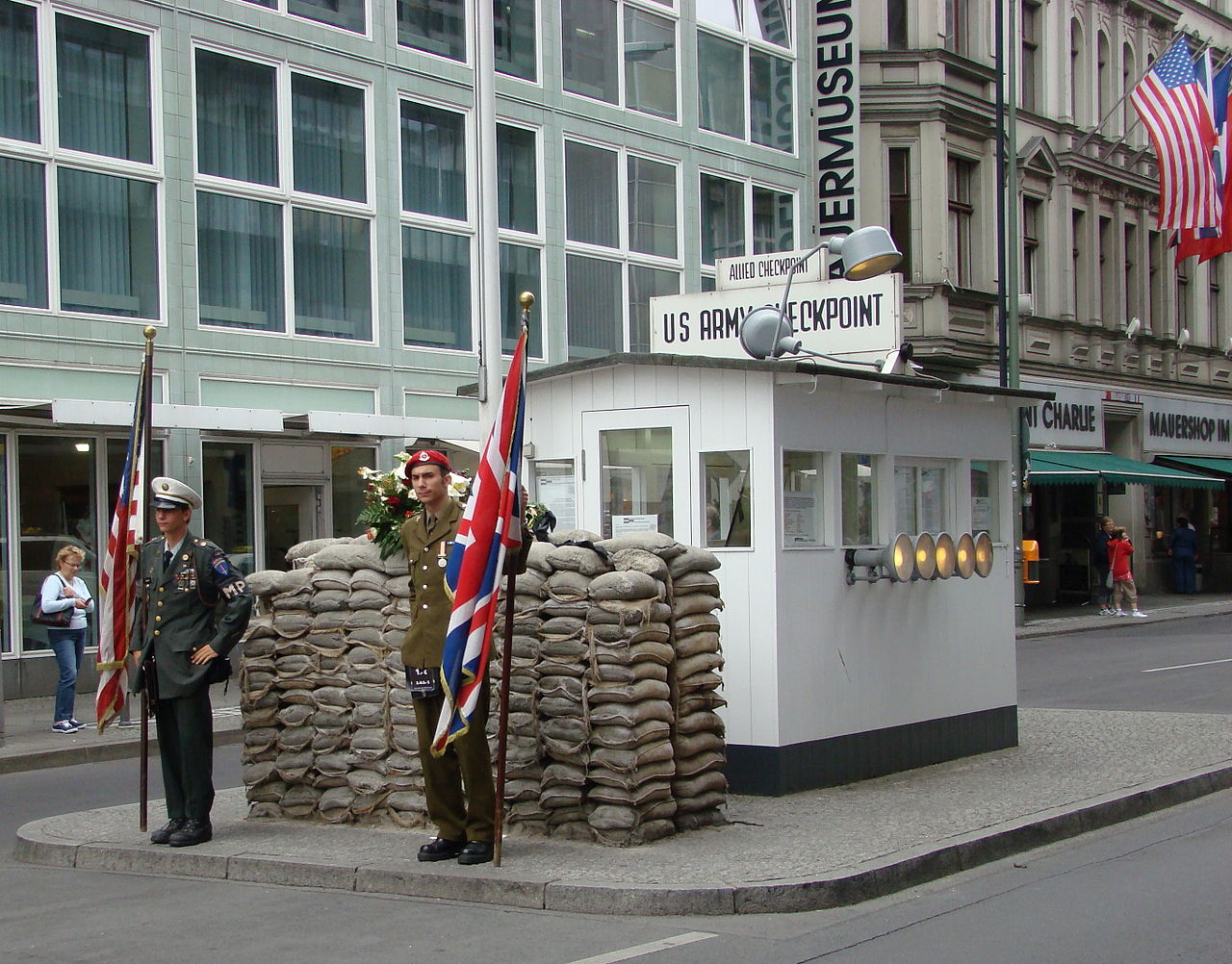 Today we sampled Currywurst.  The invention of currywurst is attributed to Herta Heuwer in Berlin in 1949, after she obtained ketchup (or possibly Worcestershire sauce) and curry powder from British soldiers in Germany. She mixed these ingredients with other spices and poured it over grilled pork sausage.  Little did she know her concoction would spiral into becoming a part of the iconic fabric of Germany’s capital; there’s even a currywurst museum.  I don’t believe the currywurst we had was pork sausage, but rather weiners.  Oh, also you can see that Col had some Kuchen also.  It’s a Wileman thing to have dessert with every meal.

The picture below is of a section of the former Berlin wall that has been moved to a spot near Checkpoint Charlie.

A section of the Berlin wall still standing and a picture of the how they have permanently marked where the wall had existed before it was torn down.

The Memorial for murdered Jews.

Bebelplatz:  The public square where the infamous book burning ceremony took place on May 10, 1933.