Well, as the title suggests, we finally made it to the Jewish Quarter. However, not before we made a bit of a detour down to the river. It was such a beautiful day that we couldn’t resist getting on the water and cruising down the river. The hour long cruise took us along much of the same ground that we covered on land but with a different perspective from the water. The commentary also filled in some of the blanks as to what some of the buildings were called. We saw the large metronome at Letna Park which was the original location of the large Stalin statue of granite. This statue was unveiled in 1955 but was demolished in 1962 after the atrocities of Stalin were revealed to the world. We floated past a number of government buildings and the ancient hydro electric plant that produces enough power for all the street lights of of Prague. It was a nice, relaxing start to the afternoon.

The Jewish Quarter is very interesting. Our ticket included four synagogues, the Old Jewish Cemetery and the Celebration Hall.  Each synagogue contains Jewish artifacts, books and teachings from different eras of Jewish life. The Jews have inhabited the Czech Republic (formerly Bohemia and Moravia) for over 1000 years. Throughout the centuries the Christian  churches and ruling dynasties have harassed and persecuted this population. From 1918 until 1938, the 350,000 Czech Jews were finally able to enjoy unprecedented freedom, equality and safety.  This social position was short lived however, with the advent of the Nazis, the Holocaust and Communism. There are currently only about 4000 Jews living in Czech Republic.

The Celebration Hall contains information and artifacts on the Jewish Burial Society. It was interesting to find that these societies still exist throughout Europe and the United States. Their main function is to ensure that the bodies of deceased Jews are prepared for burial according to Jewish tradition and are protected from desecration, willful or not, until burial. Two of the main requirements are the showing of proper respect for a corpse, and the ritual cleansing of the body and subsequent dressing for burial. The Hall contained a number of paintings depicting burial rituals in the 17th century as well as silver basins for cleansing and purification. silver cleaning tools (combs and nail files), and linen burial garments.

The Old Jewish Cemetery is one of the largest of its kind in Europe and one of the most important Jewish historical monuments in Prague. It served its purpose from the first half of 15th century until 1786. It is home to approximately 12,000 tombstones but many more burials have taken place there. As there was no other area allocated to the Jews to bury their dead during this time, graves were layered on top of each other.  As a result, the entire graveyard is many feet higher than street level.

Though most of the Jewish Quarter was demolished before World War I due to overcrowding, lack of sewage and water systems, the buildings constructed within this area since then have been well preserved.  Walking along the pretty streets you can almost forget the horrors of what happened here not that many years ago.

From the Jewish Quarter we headed back to Old Town to enjoy one last Prague Hotdog before heading back to the apartment. We are off to Krakow tomorrow for a couple of days.  Looking forward to trying some Polish cuisine!!

Since it was such a beautiful sunny day we had our lunch in front of the statue of John Hus, a church reformer (depending on which side of the fence your were standing) from the fifteenth century.  He was born and became a priest in Bohemia which is now part of the Czech Republic.  He was granted safe passage from the Holy Roman Emperor to defend his writings at the Council of Constance in Germany where he was imprisoned and burned at the stake.  Consequently his death set off a bit of a war and John Hus became a national hero. 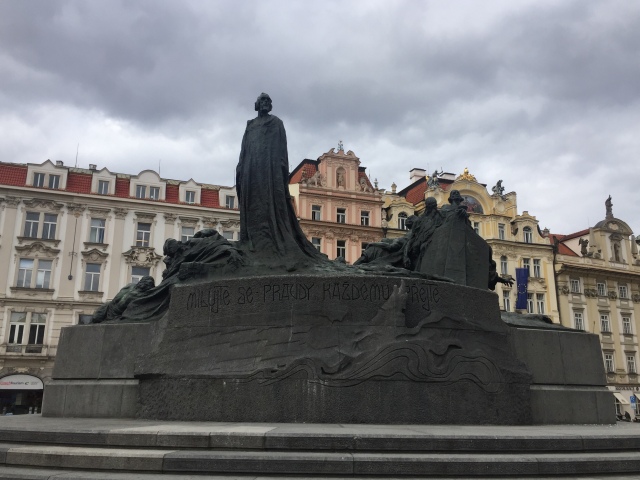 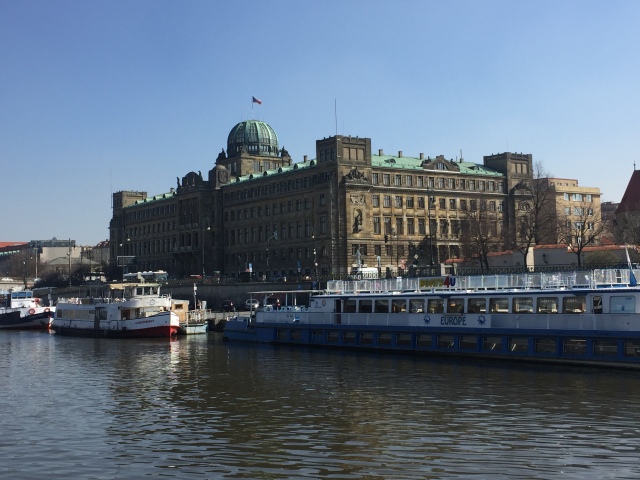 The Pinkasova Synagoga.  Here we found wall after wall of names of Jewish families, 80,000 in total, who perished under the Nazis. 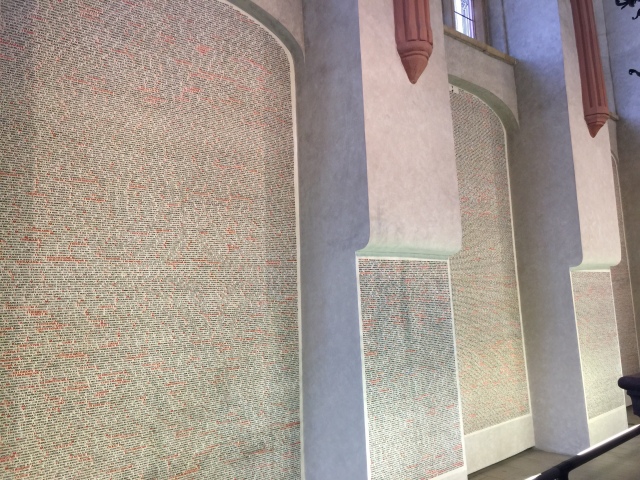 Some pictures from inside the Spanish Synagogue.  Col and I very much enjoyed touring the Synagogues.  Such a rich and long history riddled with so much pain and suffering. 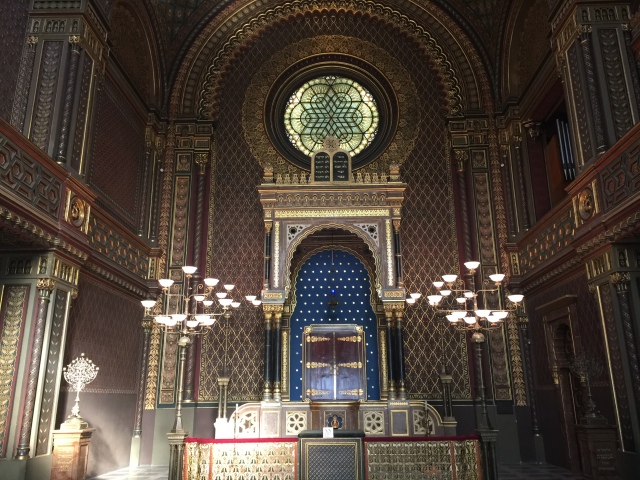 An organ is not something you will see in many Synagogues, but during the Enlightenment period some were added.

The Haskalah, or Jewish Enlightenment, was an intellectual movement in Europe that lasted from approximately the 1770s to the 1880s. The Haskalah was inspired by the European Enlightenment but had a Jewish character. Literally, Haskalah comes from the Hebrew word sekhel, meaning “reason” or intellect” and the movement was based on rationality. It encouraged Jews to study secular subjects, to learn both the European and Hebrew languages, and to enter fields such as agriculture, crafts, the arts and science. The maskilim (followers of the Haskalah) tried to assimilate into European society in dress, language, manners and loyalty to the ruling power. The Haskalah eventually influenced the creation of both the Reform and Zionist movements. 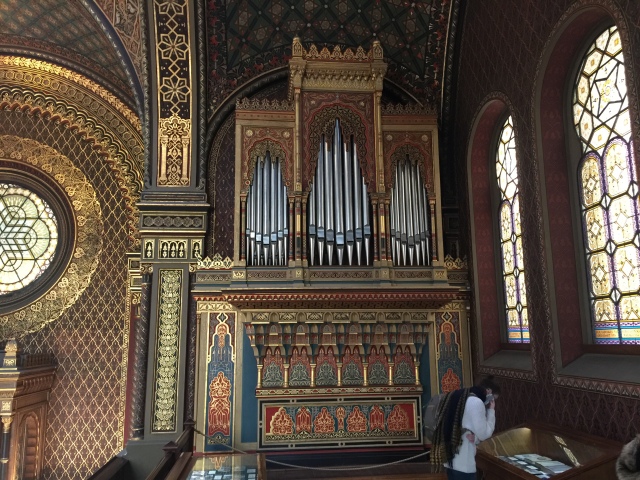 We would like to conclude this post with another slide show which seems to be becoming a bit of a tradition.  This one is in honor of the 80,000 Jewish lives that were lost in former Czechoslovakia and the John Lennon wall of peace.