After a somber day at Dachau, we rode the train back to Marienplatz to have a bite to eat. We found the Hofbräuhaus, the most famous tourist beerhouse in Munich. We walked into a crowded, noisy beer hall – a welcome change from our previous engagement. We sat at a table with a couple of young guys from Russia who did not speak much English. The universal language of “cheers” and “we love beer” was the extent of this conversation. We were joined by another young couple from Colorado and had a wonderful visit with them. They were interested in our journey (which we are always interested in sharing), and we were excited about their enthusiasm for their future together (they had gotten engaged on this trip). It amazes me that so many young people aka millennials, already have the insight that has taken us years and many miles, to realize. We had a wonderful meal with a mug of great German beer before calling it a night. We would definitely recommend this place if travelling to Munich.

On Sunday we caught the early train to Fussen and the bus onwards to Hohenschwangau to explore some castles. The area is so pretty. The town has the feeling of Jasper with the cute little restaurants and shops surrounded by the mountains. The big difference of course are the castles nestled into these mountains.

Our first stop was Schloss Hohenschwangau, built in 1837 by King Maximilian II over former castle ruins from the 12th century. It was originally built as a vacation residence for his family but was later occupied by his son, King Ludwig II and then the Regent Prince Leopold until his death in 1912. At that time, it was opened as a museum and continues as such to now. There was no damage to the castle during either World War and most furnishings, paintings and other decor are still original. Our guided tour lasted about 30 minutes and though we were ushered quickly from room to room, we did get the scope of the opulence and forward thinking of the occupants there.

However, the main attraction is definitely the Schloss Neuschwanstein which started construction in 1869. This beautiful castle was built by King Ludwig II who wanted a bigger and grander castle than his father. Unfortunately, it was never completed as Ludwig died mysteriously at the age 41 and due to his mounted debt, his family cancelled the rest of the construction project.  It is unfortunate that the King slept in the palace for only 11 nights and as he never married, it was opened to the paying public shortly after his death to pay off his debt. The castle received no damage during the wars and was actually used by the Third Reich to store confiscated booty.  Walt Disney used the castle as the inspiration for Sleeping Beauty and for the castle logo that is still used today. The exterior is complete and the floors that are completed are extremely beautiful. Our 30 minute tour took us through the king’s dining room, living rooms, bedroom and kitchen. Such a fairytale castle tucked into a fairytale backdrop.

Back in Munich after our 2 hour train ride, we hopped a tram to Königlicher Hirschgarten, the biggest beer garden in Europe / World. Though it was a Sunday night, there was still a lot of patrons (some looked like they had been there for awhile!!) and the food was very good. I don’t think that we will be losing any weight on this part of our journey!!

PS. Special thoughts are with my mom as she goes for cataract surgery today. Keep her in your prayers. Wishing everyone a happy Monday!!

There is a bridge near the castle which gives you the best view points for pictures, but because of the winter season we were not able to have access to it.  That being the case I have included some pictures from the web which really show you why this is called the Sleeping Beauty castle.  It really is a genuine fairy tale castle. 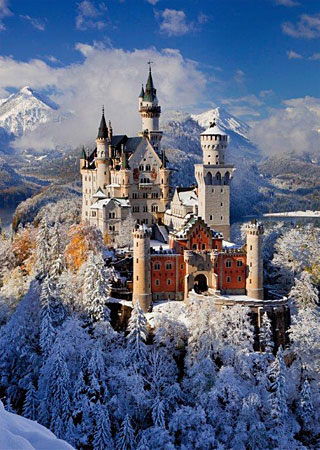 And now for the pics I was able to take.

Some of the landscape surrounding the castle.

Bavarian sausage and sauerkraut. I have never been a fan of sauerkraut back home, but what they have here is quite different and much, much better.  Col had ordered it and I found it to be very tasty and pleasing to my pallet.