Our train arrived in Venice around 1:15 PM on Monday Feb 18 and this is what greeted us along the Grand Canal as we exited the train station. 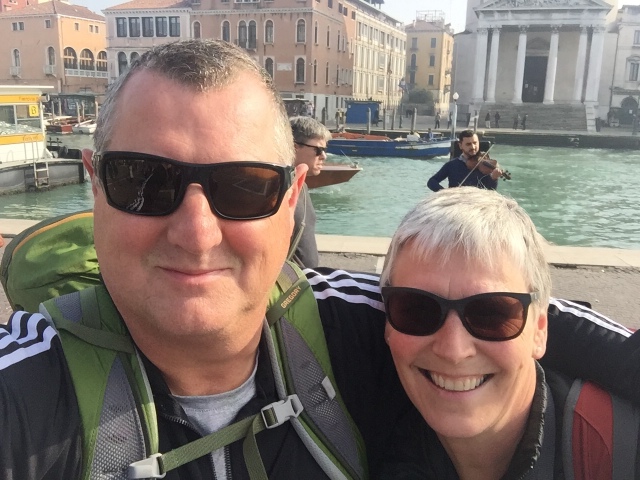 Our last day in Florence was low key but amazing just the same. We went to mass at Santa Maria Novella, next to the train station. Though it is very close to our apartment, we had yet to visit it. The first great basilica in Florence, built in 1246, it is decorated  with a number of paintings, statues and funerary monuments. The outstanding piece for me was the altar.  It is in the form of a castle and, as I found out later, it was from this Church that the first verbal attack was made on Galileo, leading eventually to his indictment and excommunication from the Church.

After mass we spent some time out in front of the church in the plaza enjoying the sunshine and people watching. This plaza was used from the 16th to 19th century to run chariot races around the obelisks that sit at each end of the courtyard, mimicking a Roman circus.

We headed off for lunch at the Mercato Centrale. We had been there earlier in the week to check it out and it is basically a massive food court. Apparently everyone had the same idea today as the place was a madhouse. We did decide to stay for lunch and eventually found a table to eat our chicken wings and Caesar salad – both very tasty.  From there we just started to wander.

We walked back to the Great Basilica and onto the Piazza della Repubblica. Here there is a merry go round and usually one or two people performing. Today there was a young man playing the accordion. And not just your typical accordion or accordion songs. He played everything from romantic, Italian songs to Metallica’s Nothing Else Matters using different sounds from his instrument. It was very entertaining and I enjoyed it immensely. We walked to the next plaza which is the Piazza del Signora. We sat down at a nearby cafe for a cup of coffee and a glass of wine. We began to hear what sounded like a marching band coming our way. Sure enough, along came the band followed by a number of groups in different types of medieval costumes. The parade lasted for about 10 minutes and actually precedes a Renaissance era soccer game  in the Piazza de Croce. The game is a combination of soccer, rugby, and big time wrestling, all played while wearing 16th century costumes. Unfortunately, we did not have tickets to attend the match as we were not aware that it was happening but it does explain the large machines the day before in St Croce square that were covering the square in sand while we were eating our lunch.

We walked to the river and once again crossed the Ponte Vecchio. And we once again noted that it seems to be nothing special except for maybe all the high-end jewellery shops that line the bridge. We walked a few blocks across the river until we got to another bridge and crossed back over. As we now followed this street towards city center we couldn’t help but notice all the ritzy stores – Armani, Gucci, and Prada to name a few. Among these stores, we stumbled across another church, fairly unassuming and decided to step inside. Probably one of the nicest surprises of the day, St. Michael’s church was serene and absolutely beautiful. Another magnificent altar, statues and paintings for our viewing pleasure.

It was getting dark so we headed towards home, stopping for a bite to eat at a little restaurant close to the apartment. We loved Florence and the surrounding areas including Pisa and Assisi. We know that there is so much more to see in this region and certainly hope that we get a chance to come back this way again. We head to the floating city of Venice on Monday, and as always, we are ready for our next adventure. 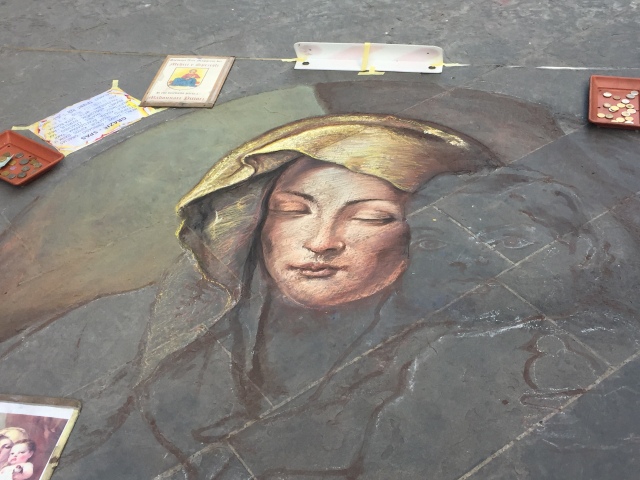 Music definitely is the International Language.

One last view from the bridge.

Out of our price range.  Hard to believe someone would pay that much for a backpack.   $1663.29 Canadian.

Anyone up for a Parade?  Apologies for the video being sideways.  Not sure what happened there.

That’s it for now see you soon in Venice.  Ciao