Today we headed towards the Notre Dame Cathedral but before we got there, we stumbled on another Yellow Vest parade. As you recall, trams, buses and trains were not running today due to strikes. We also learned that schools and some government offices were closed as well. Anyways, we made it to the Cathedral but the doors were closed until two. We grabbed some lunch at Subway and then walked a few extra blocks to the largest Russian Cathedral outside of Russia. It is beautiful! It was built in the early 20th century when Tsar Nicholas II visited Nice and fell in love with the area. We were not allowed to take pictures inside the church but we did get a few outside. As a side note, there was a group of senior citizens outside the church taking part in an art class. It was so inspiring watching them paint and draw. They looked like they were having a ball!

On our way back to Notre Dame Cathedral, we stopped off at the train station to check out the layout. We are taking the train for the next leg of our journey to Florence and we want to make sure that we know where we’re going once we get to the station early Friday morning.

Notre Dame did not disappoint. This church is one of the first structures built after France annexed this area in 1860. The building is known for its beautiful stain glass and simple lines.

Being another gorgeous day, we finished the afternoon back down along the waterfront. We stopped for a drink, then grabbed some groceries and made a wonderful steak supper with all the trimmings. Another perfect day with the love of my life. Can’t wait for tomorrow! 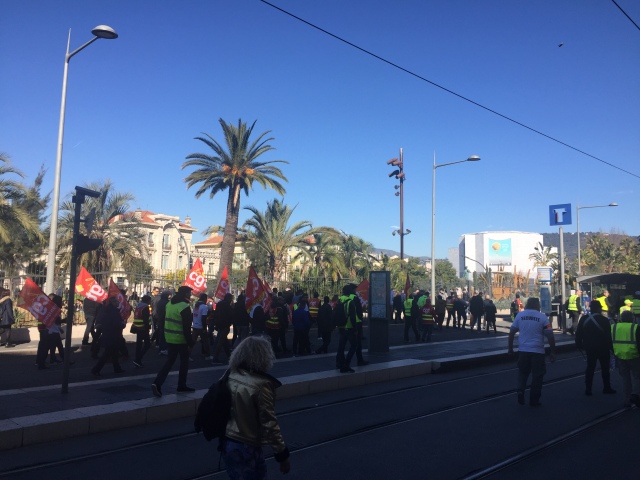 Notre Dame.  Not the real one, that is in Paris.