Today is our first full touring day in a week. We’ve definitely enjoyed our downtime and binge watched a couple of series on Netflix and did quite a bit of planning for the next phases of our journey.  Oh, we went out for short walks everyday – usually to eat or drink or to pick up something to eat and drink. 😁😁🍷🍷 We thought you guys might like a little break too but, your break is over. Back to the blog reading grind!

Yesterday we walked up a few hills, took in some breathtaking views and spotted a castle not far from our apartment. However, it was a little late in the day to start poking around in old castles so it became our goal for today. I started the day with a haircut and a pedicure and was ready for a day of exploring. We began with the aforementioned Castelo De S. Jorge which consists of the castle, the ruins of the former royal palace and part of the residential neighborhood that was home to the elite. The castle was built by the Moors in the mid 11th century. When Lisbon was conquered by the Portuguese in 1147, the buildings were modified to accommodate the king, his court and the bishop. It continued to play a military role until the early 20th century. The castle is quite impressive and very well preserved. We only spent a couple of hours there as across the bay we had glimpsed the large statue of Jesus, known in Portugal as Cristo Rei (Risen Christ).

Before we got on the ferry that would take us across the bay, we stopped for a couple of  drinks in an outdoor cafe near the waterfront. After all, it was 18 degrees Celsius today – we had to enjoy the sunshine. (sorry to the folks at home that are living with -52 – Yuck!!) The ferries are part of the public transport system so we were able to swipe our cards and hop on the boat for only 1.5 Euros each (about $2.25). What a deal!! On the other side of the bay, in the city of Almada, we walked along the waterfront for about 20 minutes until we reached an elevator that actually took us up the side of a cliff. Though we could see the 103 metre iconic monument, we still had another half hour walk before we actually reached it. This statue of Christ stands high above the southern banks of the Tagus Estuary, and depicts Christ with arms raised, blessing the city. Since its consecration in 1959 Cristo Rei has been an important Portuguese pilgrim destination. The Cristo Rei has many similarities to the Christ the Redeemer statue in Rio de Janeiro as the Brazilian statue was the original inspiration for the Portuguese monument.  And it is magnificent!! We took the elevator and a few flights of stairs and we got to the viewing deck at Jesus’s feet. The views of Jesus above are amazing as well as the views in each direction. We could see the Atlantic Ocean to the southwest, Lisbon to the northwest, the suspension bridge Ponte 25 de Abril (a copy of the Golden Gate Bridge in San Francisco) directly west and the massive 17.2 km Ponte Vasco da Gama to the northeast, both bridges spanning the Tagus Estuary and linking north and south Portugal. As I mentioned earlier, it was a blue, cloudless sky and we couldn’t have asked for better weather to stand high above the city.

Instead of walking the 50 plus minutes back to the ferry, we took a bus from the monument to the waterfront.  And because the scanner wasn’t working on the bus, we got a free ride. How cool is that!! Another ferry ride across the channel, a 10 minute walk along the waterfront, up to our apartment and we are in for the night. My husband is slaving over the stove making, what smells like, a delicious pasta sauce while I write about our adventures. We have yet to experience Fado but we have a few more nights left here, so I am sure it will happen. Stay warm everyone. God Bless.

PS. The pasta was fantastic!! 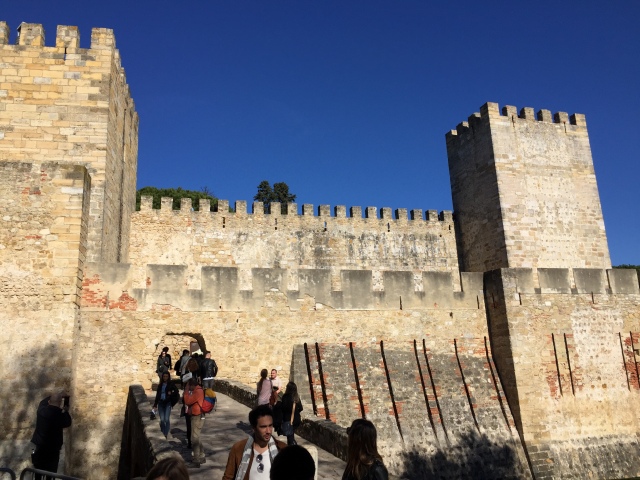 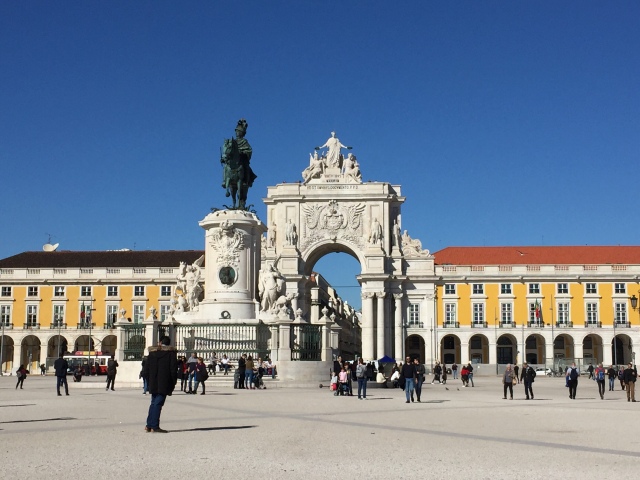 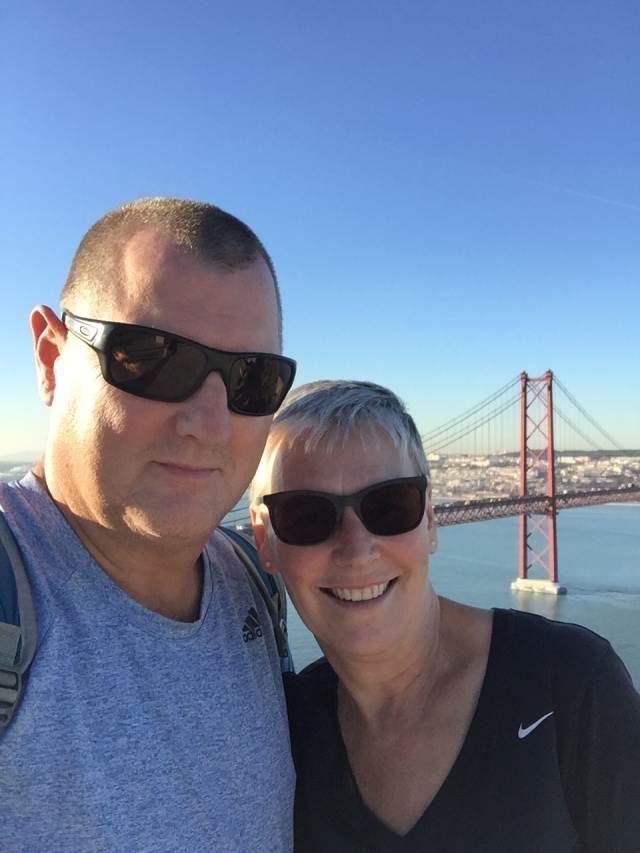