As Col mentioned in the previous post we have decided to spend an extra eight days in Portugal and today was moving day.  Needless to mention it went off without a hitch as I just followed Col on to the bus and fifteen minutes later we were at our new apartment in the heart of Alfama.

Alfama is one of Lisbon’s most genuine neighborhoods – its architecture presents the unique characteristics of old and colorful buildings that give it a joyful character and tranquility. Strolling through the Alfama district is an invitation to get lost among extremely charming streets and alleys. Easy to get lost in, even easier to find!

Alfama is one of Lisbon’s oldest neighborhoods and was founded by the Arabs who gave it the name “Al-hama” meaning ‘source of hot water, good water’. You haven’t genuinely experienced Lisbon without getting lost among the paths and charms of the neighborhood that is considered the heart of the city. While walking through the disordered and narrow streets of Alfama, you’ll feel like you’re in a small village, witnessing conversations between neighbors, listening to fado echoing through the stairways and being able to see the Tejo River from another perspective.

The coolest thing about exploring Alfama is feeling the neighborhood’s true spirit and being surprised by the peculiar characteristics of typical buildings with sloping roofs, clothes drying on clotheslines that reinforce the intensity of local colors and the daily life of the residents with their customs. 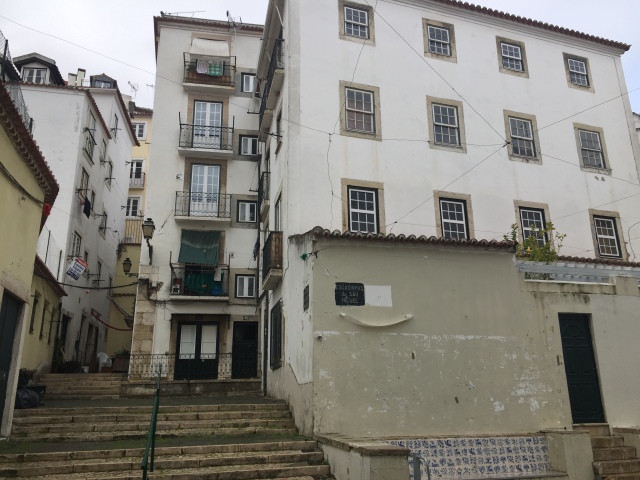 One of the things in Lisbon I have been looking forward to is Fado.  Although the origins are difficult to trace, today fado is commonly regarded as simply a form of song which can be about anything, but must follow a certain traditional structure. In popular belief, fado is a form of music characterized by mournful tunes and lyrics, often about the sea or the life of the poor, and infused with a sentiment of resignation, fatefulness and melancholia. This is loosely captured by the Portuguese word saudade, or “longing”, symbolizing a feeling of loss (a permanent, irreparable loss and its consequent lifelong damage).

Fortunately there is a wide variety of clubs right outside our door or down the street to choose from.