We got another late start this morning as we chose to sit out on the balcony and have coffee and a bit of breakfast. Once on our way we headed towards Aristotle’s School in Lykeion. We walked through some pretty cool streets of meat markets, fish markets. general shops and loads of restaurants. In fact, all day we walked by restaurant after restaurant. Though we bought a few groceries yesterday, we will probably eat supper out tonight. But what to choose?

Anyways, as we approached the park entrance that would take us through to the School, we saw a sign saying that the park was closed for the day. A French couple told us that Angela Merkel, the German Chancellor, was coming for a visit. It was then that we noticed that the streets were lined with armoured vehicles and a very large police presence. We found another way around to Lykeion and spent an hour or so poking through the ruins there. This was originally a gymnasium where men would train in wrestling and boxing but it became well known as a school of philosophical debate founded by none other than Aristotle in about 335 BCE. These ruins were only discovered in 1996 and opened to the public in 2009.  Just down the street from there we stumbled upon the Byzantine Museum and wandered around inside looking at stones and art from the Byzantine Era. Remember yesterday I mentioned about all the loose stones that litter the archaeological sites? Well, I think that this museum was able to identify lots of them and now have them on display. It was actually a very well laid out museum with lots of information, artifacts and artwork (Leah Boulet – you would have loved the art!!)

We ate our homemade lunch of crackers, salami and gouda cheese while sitting in the gardens of the museum. The day was cloudy but not terribly cold so it was quite pleasant. Our next stop was Hadrian’s Arch, the gateway to The Olympieion, aka the Temple of Olympian Zeus. To get there we had to walk by the Parliament Buildings which of course were under heavy security. A couple of the streets were closed to traffic but we were able to walk through. Of course, there is always some idiot that has to try and get through the police barricades and we saw one driver getting a dressing down from the police. (Rick Welwood – as we go through our travels we are beginning to think that the 80% that you mentioned is actually closer to 95%!!)

So, Hadrian’s Arch – very cool and a perfect frame for the Parthenon up on the hill behind it. Then back through the gates to the Temple of Olympian Zeus.  Construction began on this iconic temple in the 6th century BC during the rule of the Athenians, but it was not completed until the reign of the Roman Emperor Hadrian in the 2nd century AD, some 638 years after the project had begun. During the Roman period the temple -that included 104 colossal columns- was renowned as the largest temple in Greece and housed one of the largest statues in the ancient world. However, the temple fell into disuse and ruin shortly thereafter and building materials were liberated from the site for projects elsewhere in Athens. Regardless, today there are still 15 complete columns standing and one lying on the ground which is quite remarkable.

We then followed our Google Maps to the Ancient Agora which led us through the Plaka, another neighborhood of quaint restaurants and little shops. We could not help ourselves and stopped for a beer at one of the street cafes. Unfortunately, by the time we got to the Agora, we had missed the last entry – 3:15 PM. Who knew? So folks, I was unable to get a first hand answer as to why this one was replaced by the Roman Agora that we saw yesterday. Even my research does not give me a clear answer. Maybe, the Romans just wanted to flex their muscle and close down the existing market. Who really knows at this point?

From there we walked another five minutes to the Kerameikos, the ancient cemetery of Athens, which besides a large number of ruins also houses a museum. However, again, we missed the last entry of 3:15 PM. Bummer. Richard took a few pictures through the fence and we headed back to the apartment.

As I sit here writing and looking out onto the lights of the Acropolis, I am again grateful for our good fortune as we experience these once in a lifetime moments. Tomorrow is a travel day as we head to Rome for five days. Can you believe that I will be spending my birthday in Rome?!?!? Me neither!! In fact, it will be my first birthday without snow. That in itself will be pretty different. Can’t wait!!

Aristotle’s School.  Some of the pictures of the story boards may be hard to read, but I am hoping if you expand them they can be read as they have some good information.  There is not much left of the school, but can you imagine the lectures that Aristotle would have given and the questions he would have received and what about the debate? Oh my they must have had some interesting discussions. 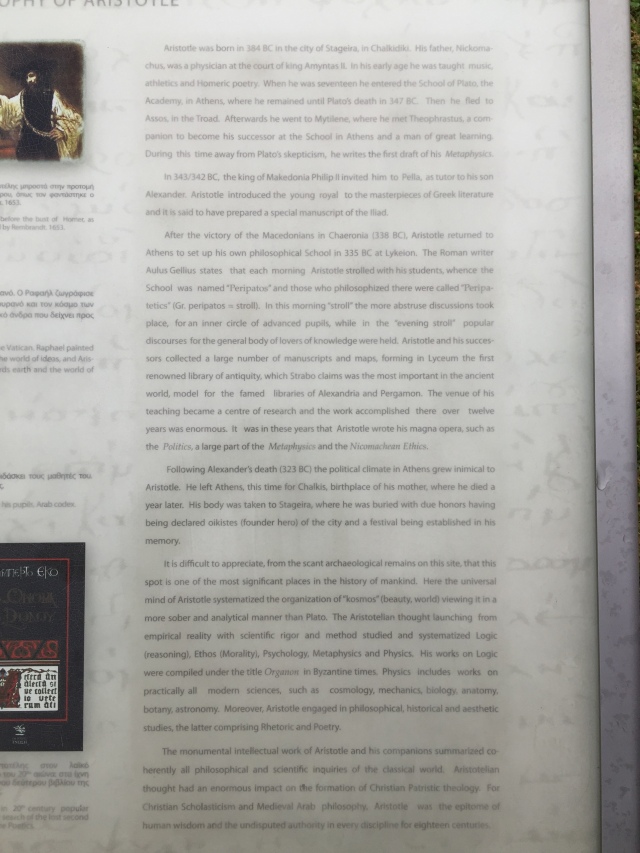 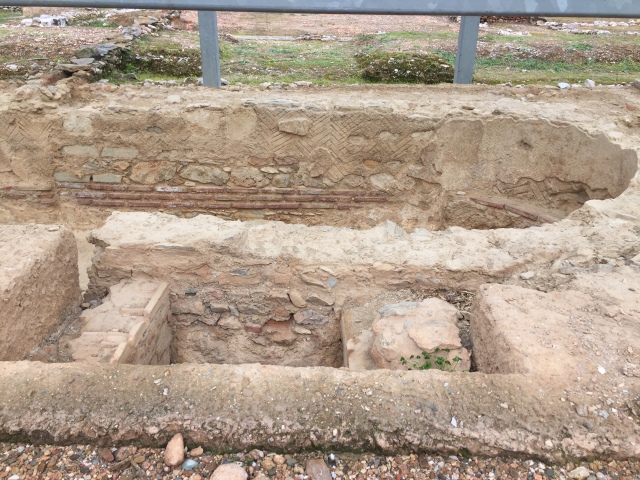 The Byzantine Museum.  It had some amazing art work and also some interesting documents on how Christianity blended in with the local cultures and adapted some of their practices and folklore. 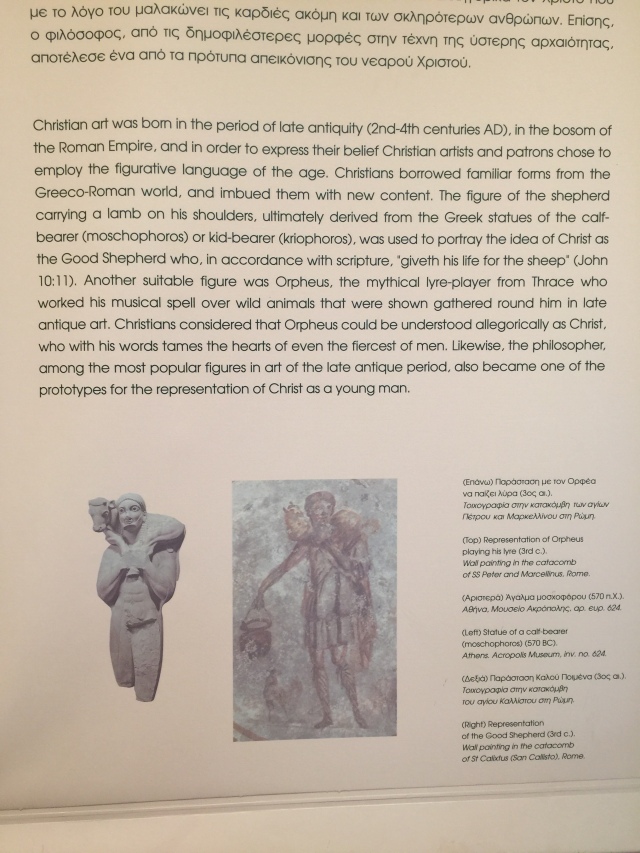 Orpheus (not Morpheus from the Matrix) who had control over the wild animals and beasts.

We were walking to our next destination and we came across the ruins of this Roman Bath which are right along the subway.  We were not looking for it, but we found it. 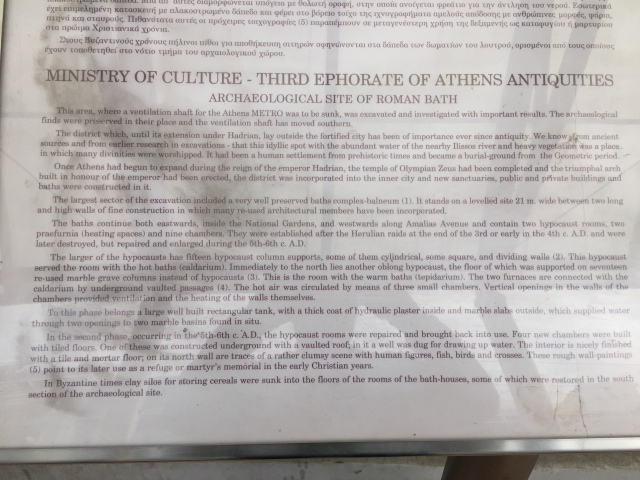 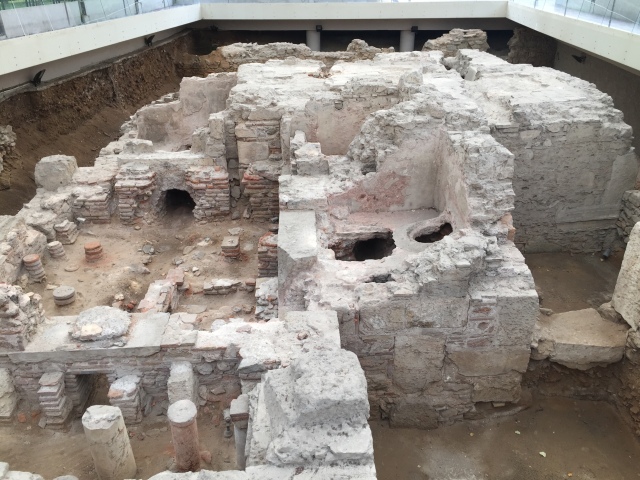 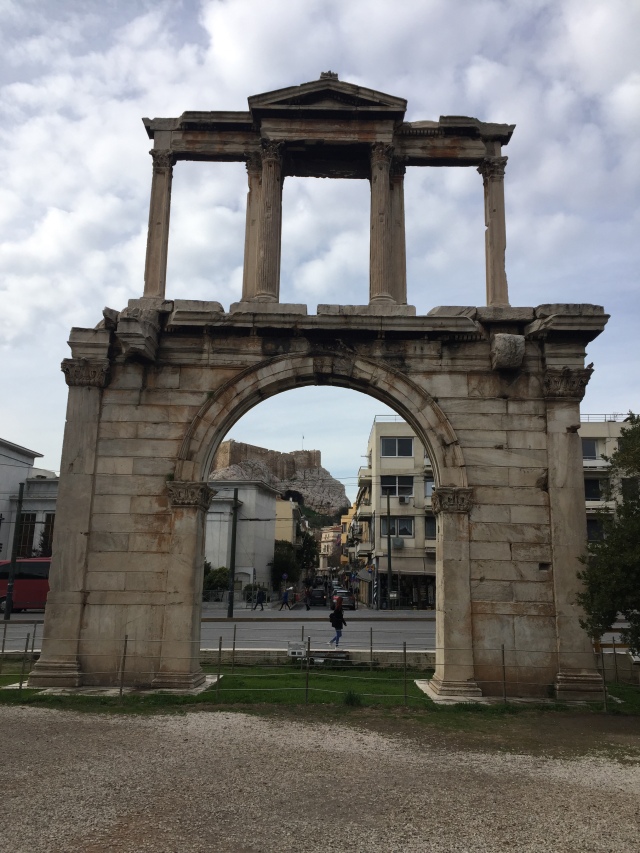 So my beautiful wife says to me.  “Why don’t you take a selfie and see if your head is bigger than the Arch”  Sadly she was right.

The Sanctuary of Olympian Zeus. 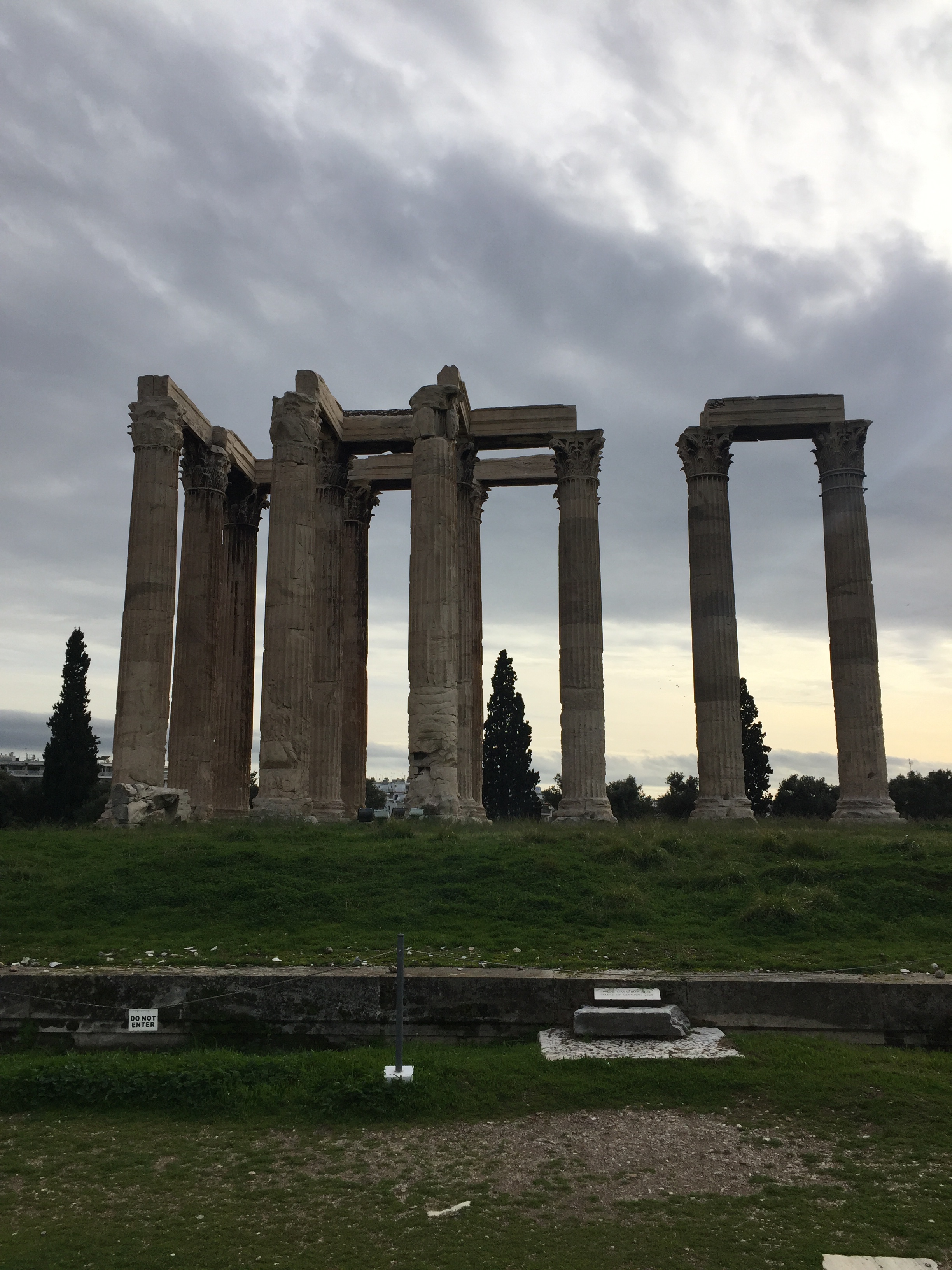 As per Col’s note in both yesterday and today’s blog, she made me take a picture of the scattered rocks around the archaeology sites so that you could understand what she meant. 3-D puzzle pieces. 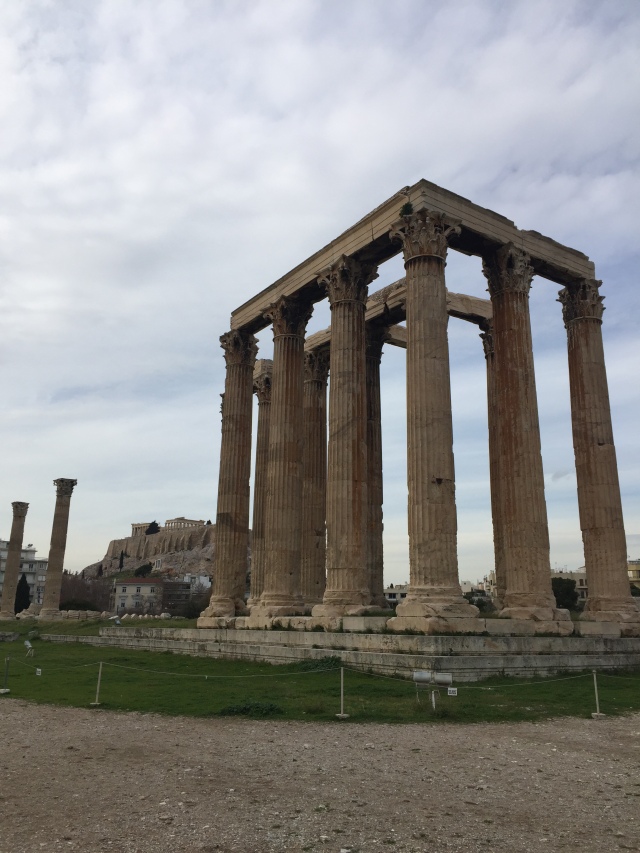 The picture below was taken from the Temple of Zeus, but in it you can see the Hadrian’s Arch along with the Acropolis. 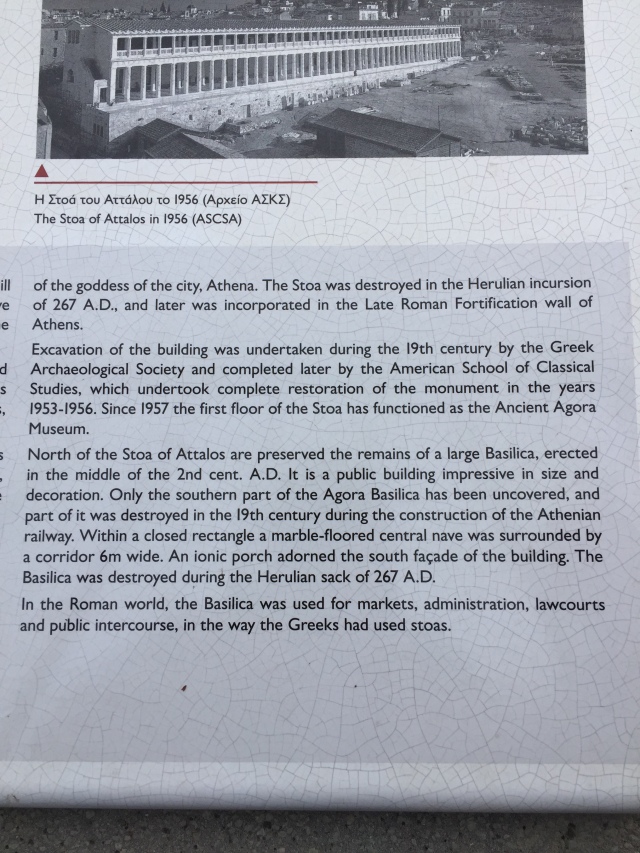 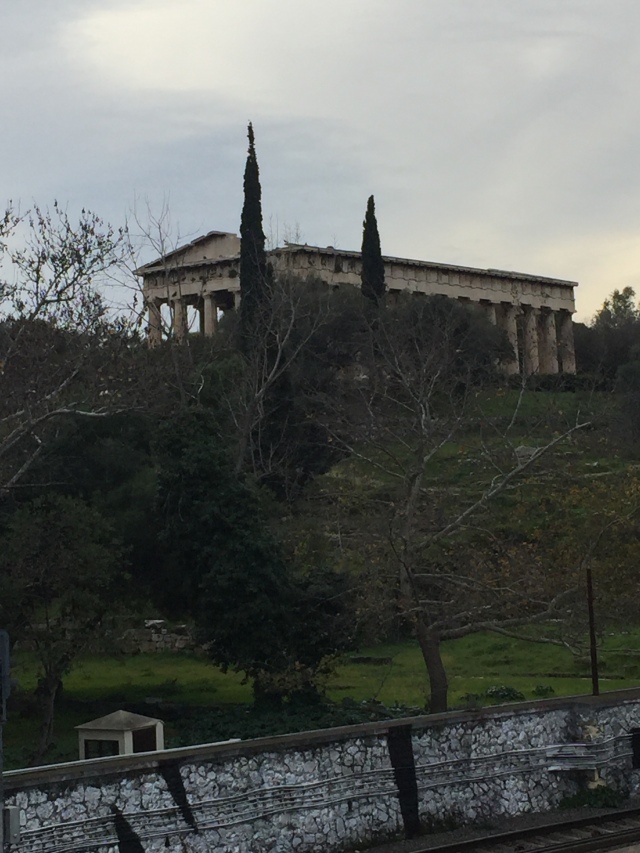 The Kerameikos Museum and Ancient Cemetery.  Not many pictures due to the fact it was closed when we arrived.  Silly Greeks.

As Col had mentioned the police were out in full force today with the visit from the German Chancellor.  We saw regular officers in cars, motorcycles and on foot along with riot police all decked out and of course the SWAT vehicles.  We even saw the army out from time to time.  One of the pictures below shows the Government building where some of the meetings may have taken place along with a picture of some silly person who went through a barricade and at which point the police officer was tearing a strip off of him.

Athens definitely has a different feel and vibe to it from anywhere else we have traveled so far.  With all the restaurants and cafes, butcher shops and markets along with the people it just feels like we are in Europe and I wonder if the rest of Europe will be like this.  If so I think we will enjoy it. 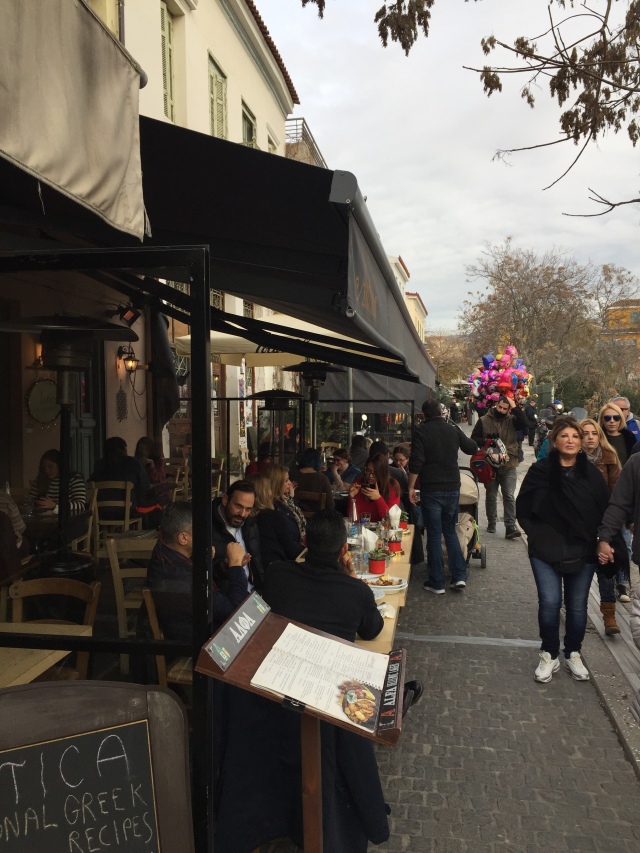 Time for a cold one.  We stopped at a quaint little restaurant buried in some small little side street.  The first picture as you can see is me holding my beer.  The second one is me with the look on my face after Col said the beer mug was almost as big as my head.  I really hate her. 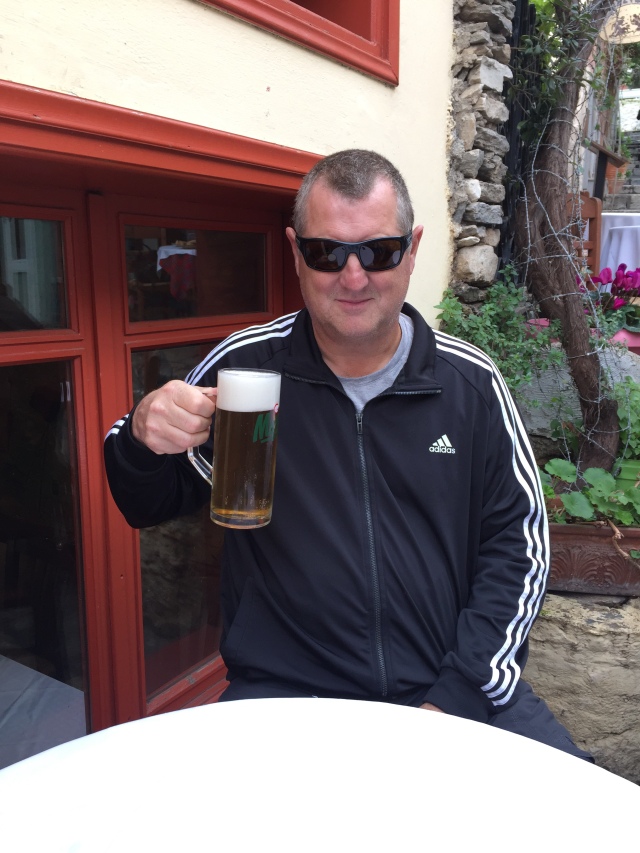 Janice, our Airbnb host in Jerusalem was telling us about how much graffiti there was in Athens.  Of course you never really believe it until you see it for yourself.  Well, let me tell you it is everywhere. 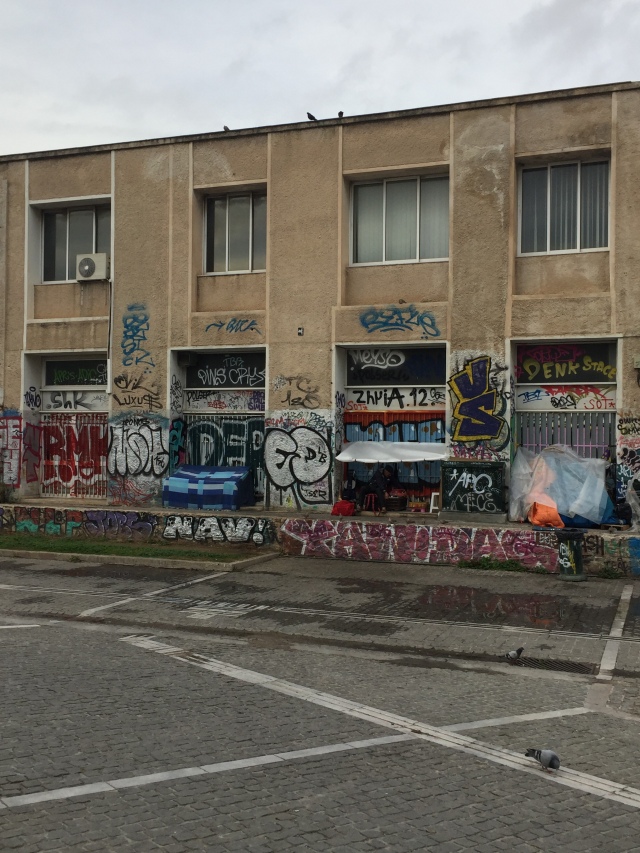 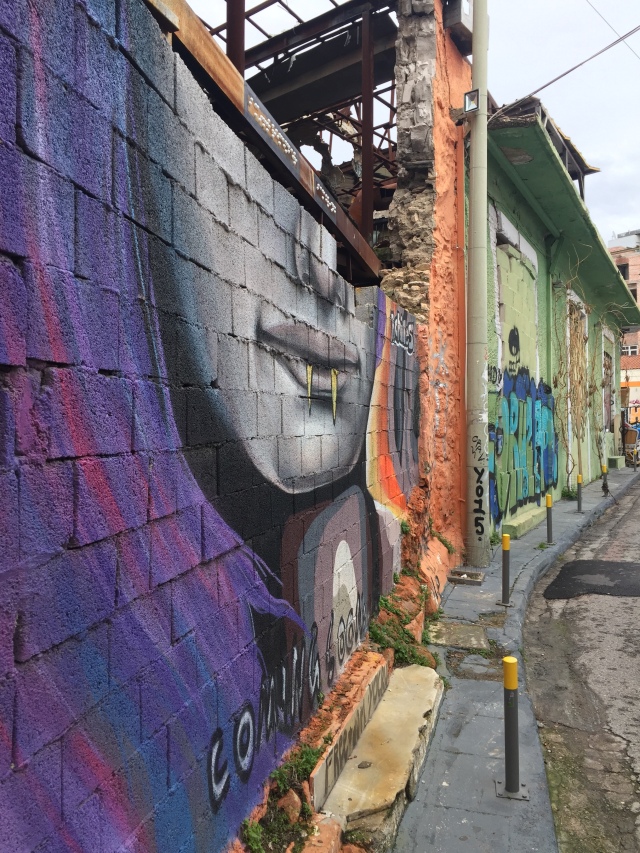 See you in Rome.