Acre is a historic walled port-city with continuous settlement from the Canaanites going back 5000 years.  The city has changed hands many times over the centuries as has so many others in this region.  After the Canaanites the city has belonged to the Phoenicians, Greeks, Romans, Byzantines, Arabs, Crusaders, Mamluks, Ottomans, British and finally the state of Israel. The present city is characteristic of a fortified town dating from the Ottoman 18th and 19th centuries, with typical urban components such as the citadel, mosques, khans and baths. The remains of the Crusader town, dating from 1104 to 1291, lie almost intact, both above and below today’s street level, providing an exceptional picture of the layout and structures of the capital of the medieval Crusader kingdom of Jerusalem.

The ruins were as advertised and did not disappoint.  The highlight of the day was the ruins of the Fortress of the Order of Knights of the hospital of St. John (The Hospitallers).  A brotherhood whose purpose was to help sick pilgrims.  The majority of the fortress is buried beneath the current city and the history that is now on display is nothing short of spectacular.

After the fortress, we wandered around lost for quite some time until we finally found the Turkish bath. This proved to be quite interesting as it had been in use up until about sixty years ago.  The rooms have been well preserved and you could almost feel that you were sitting there waiting for your bath.

The last piece of history that we visited was the Templar Tunnel which was a tunnel from within the old city of Acre which made its way to the port along the Mediterranean  Sea.  We had to bend down a few times to get through, but it was worth it. The tunnel was only 150 meters long, but it gave the Templars an awesome way to get all their cargo out of the Holy Land and back to Europe.  Remember the Templars also became bankers or financiers during the crusades so they probably would sneak some stuff out from time to time.  We wanted to take a relaxing walk around the old city walls, but the wind was blowing so hard. How hard, you ask?  Well, the waves were hitting the old wall with such a force along with the gail force winds we would have been soaked with sea water so we cut our walk short.  Col and I were actually watching a lady having her picture taken along the wall and a wave broke over and drenched her.  Quite funny actually. 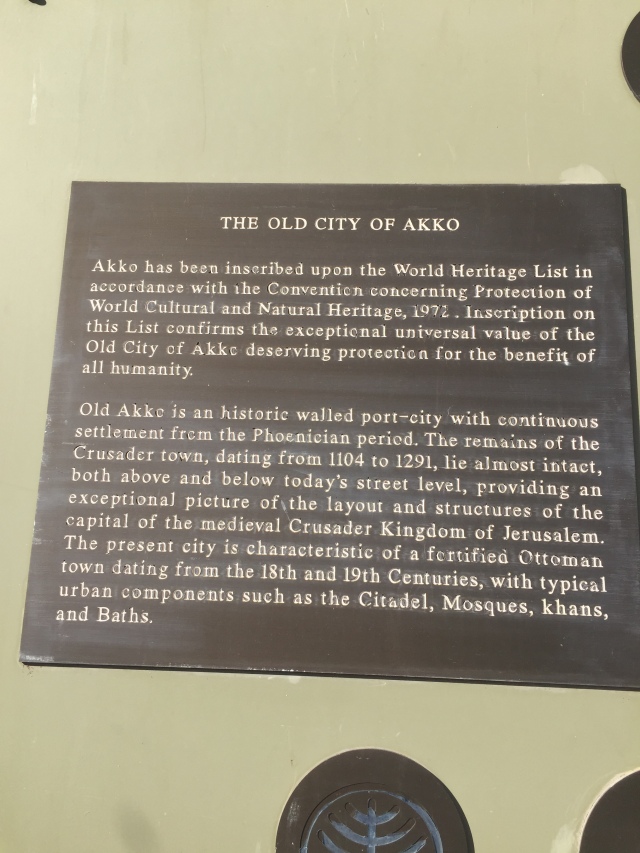 The picture below is of the Latrines.  (Toilets) Not a lot privacy there.

Anyone up for a Turkish bath? 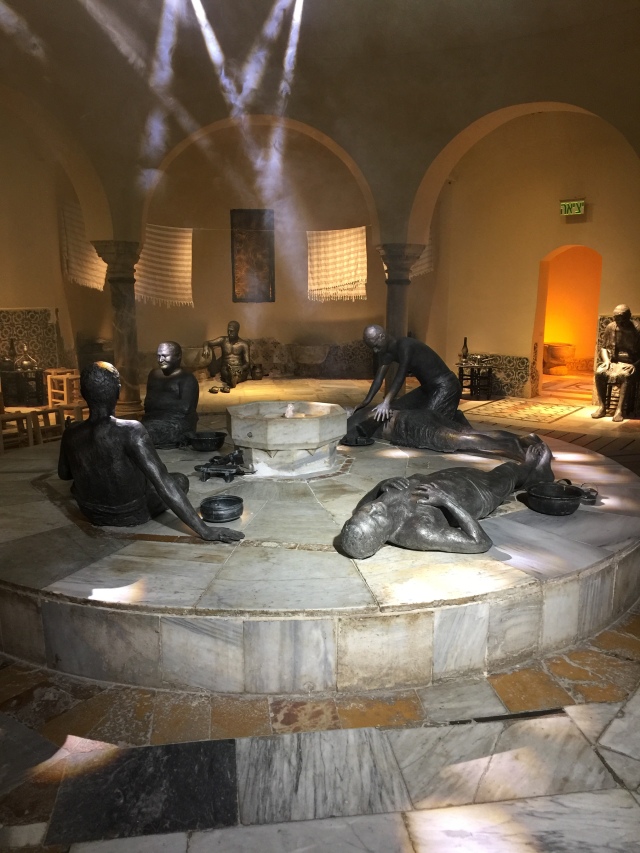 Unfortunately the light inside the tunnel was not good enough to take pictures so I do not have any, but what I do have is sign that proves we were there and what greeted us when we exited the tunnel by the sea port.

Below is an ancient artifact that was used when the Crusaders sacked Antioch. (as we feel that our posts have been pretty serious as of late, we thought we would add this clip from Monty Python to add some levity – Enjoy!!)

A final comment on this post.  The Crusades continue to be a controversial subject for many people and my personal opinion is that they remain a black eye on our history.  This post in no way endorses the Crusades or trys to glorify them.  We love history and believe we should learn from history and that is why we went.

Perhaps Saint John Paul ll said it best:  “In particular, we cannot forget what happened in the month of April 1204,” the Pope said, in reference to the sacking of Constantinople by Crusaders. “How can we not share, at a distance of eight centuries, the pain and disgust.”