Thursday morning dawned windy, rainy and cold. It was a great day to go to a museum so we headed to the Central Station to catch the Light Rail to Yad Vashem, the world renowned Holocaust museum – a must see when in Jerusalem. Apparently, all the other tourists had the same idea so the museum was quite crowded and even uncomfortable at times. However, it was fantastic! We spent over four hours there and could easily have doubled the time. The subject matter is of course very heavy and emotional so we actually felt quite exhausted by the time we left. The museum details the rise of Hitler and the Nazi party throughout the 30’s, the politics leading to the war and the subsequent discrimination, work camps and death camps where millions of Jews from all over Europe were slaughtered. There are video recorded testimonies from survivors and their struggle to put their lives back together after the war. All in all a heart wrenching few hours spent witnessing man’s inhumanity to man.

Because our shoes were soaked from walking from the train to the museum, we decided it was time to buy some new waterproof shoes to get us through the winter in Europe. Back on the train, we confidentially rode past our stop to the other side of the city to a North Face store. Unfortunately, the shop only had a dozen pair of shoes to choose from so Richard asked Google maps for outdoor shops nearby. Remember when I mentioned that there is very little English in Israel? So, store names come up in Hebrew and you blindly follow the little moving dot on the map hoping that it takes you somewhere useful. In this case it did. We each bought a new pair of shoes and we are all set for Europe. We managed to get ourselves back to our lodgings and being our last night in their home, our hosts took us out for a Middle Eastern dinner. The quantity of food was amazing and we certainly did not leave there hungry!

On Friday we reluctantly left Janice and Boaz’s home for our next adventure. We walked about 15 minutes to our new lodgings, dropped our bags and headed back to the old city. Our goal today was to take part in the weekly Via Dolorosa walk guided by the Franciscans. This walk through the old city relives the final steps of Jesus as he carried his cross towards his death by crucifixion. We had some extra time before the walk began so wandered around through the streets, stopping into various churches and interesting sites along the way. The weather was cool and drizzly so we were happy for our rain jackets and new shoes. After a bit of confusion as to where the walk actually started, we arrived at the Church of the Flagellation to join a number of people already assembled. Imagine everyone’s disappointment when the announcement was made that the walk had been cancelled for this week because it was so close to Christmas. Everyone milled around for a few minutes making sure it was actually cancelled, before finally moving off in separate directions. We realized that we should start heading for home and get some groceries for the next couple of days. Shops begin to close around noon on Friday in preparation for the Shabbat (Sabbath) and do not reopen until Saturday evening. Public transportation also shuts down and as we walked back to our BNB we noticed that there were very few people on the street. As Richard and I discussed this phenomenon, we realized that this is not a bad thing. On the contrary, it felt more like the beginning of a family holiday where you hunker in with your loved ones for a couple of days, leaving the outside world behind. We resolved to do this more often once we get back to Canada. In general, we stuff our lives full of things to do but miss the most important things of all – connecting with our friends and family. So, friends and family, be prepared for lots of loving and much sappiness on our return home!

PS. We managed to find a cheese shop that was still open and bought some beer, cheese, crackers and bread. There was also a gas station convenience store close by so we were able to top up our snacks to include some chips and chocolate. A feast for a King!

There are no pictures from Yad Vashem, the Holocaust Memorial.  The history and the atrocities are something each person needs to experience for themselves.

The Church of Saint Anne, birthplace of the Virgin Mary. 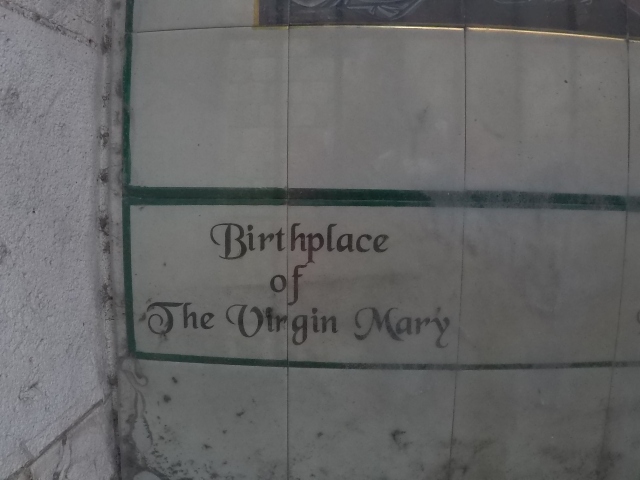 Col lighting a candle at the Church of Saint Anne. 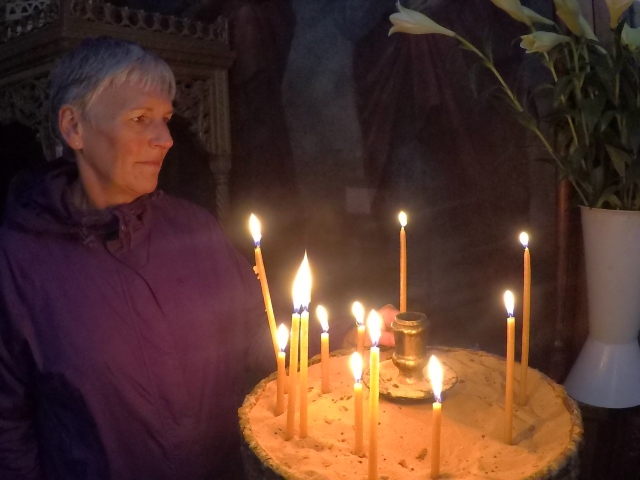 The place Jesus was kept prior to his crucifiction. 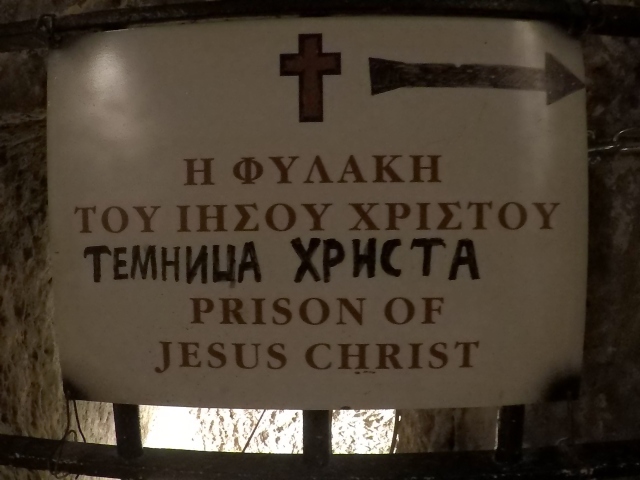 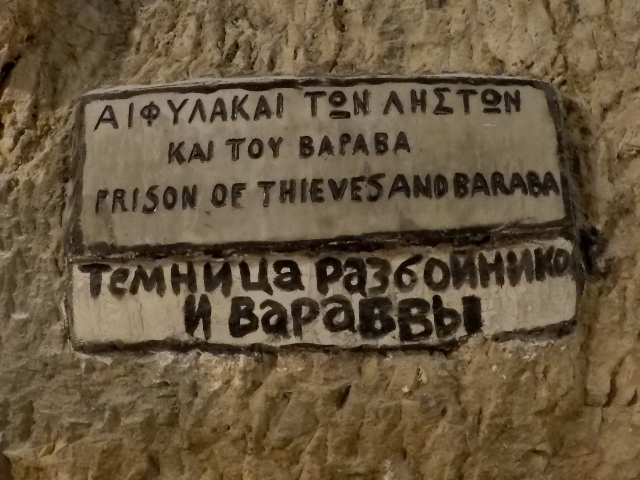 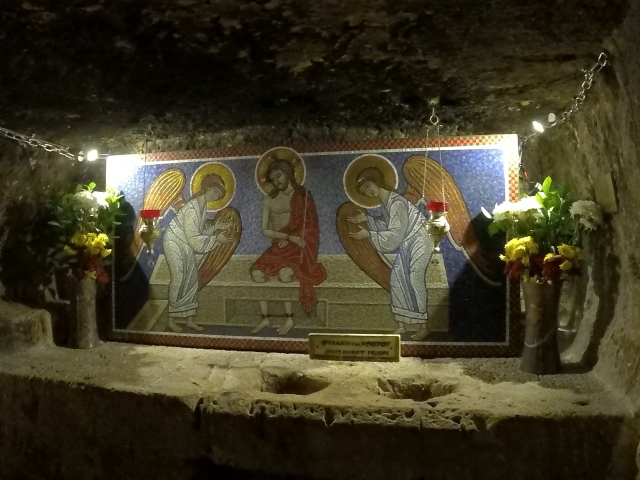 The Church of the Flagellation is traditionally known as the place where Jesus was condemned to death.  As Col mentioned earlier the Way of the Cross was not held on the Friday we were there because apparently they do not have the procession right after Christmas.  We intend to do it on our own this Sunday.  Pray for us that we may experience and appreciate fully the sacrifice that our Lord and Saviour went through for us.

My Aunt is a sister of St. Joseph so I thought I would throw this picture in from the Old City. 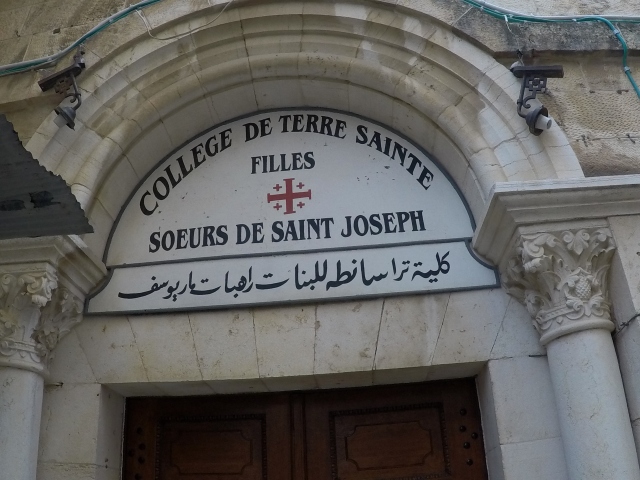 And finally under the continuing topic of “You Don’t See This Every Day” I present the following picture. 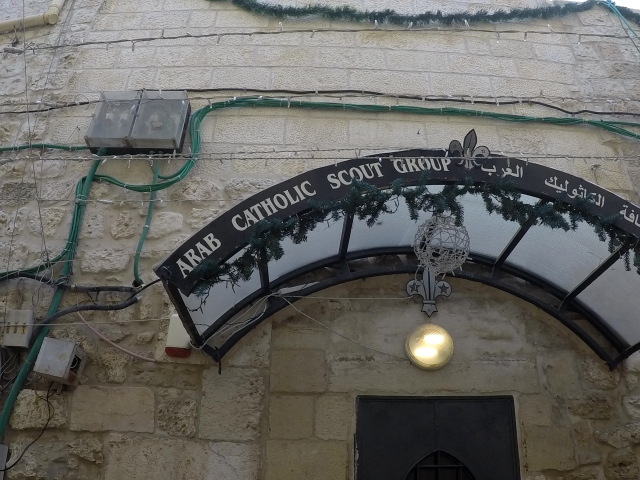