We arrived in Jerusalem later than expected on December 23rd. Flights were delayed in both Egypt and Jordan so we missed the train in Tel Aviv that runs into Jerusalem. That meant the harrowing experience of trying to find alternate transportation. The first thing that we noticed about Israel is the lack of English – even at the airport it was very fine print. We tried to haggle for a taxi ride but they were looking at $80 plus luggage fees so we decided that we could find another, cheaper mode of transport. We settled on the bus, and after asking a driver, a couple of bystanders and a call to our Air BNB hostess, we finally figured out which bus and what stop to get off. The final price? 32 shekels or about $12. A little stressful but we consider it a win. We arrived at our BNB around 10:30 PM and had a good chat with them and called it a night. We had a big day tomorrow!!

Christmas Eve dawned cloudy and cool and it seemed that our moods matched the weather. Both of us are not sleeping particularly well, we have been sick and not eating properly and we miss our families terribly at this time of year. We spent the morning shopping for some gloves and hats for the midnight service in Bethlehem square, and after getting lost a couple of times (Richard’s phone died when we were minutes from our lodgings), we caught a taxi back (at an exorbitant rate), and got ready for our tour of Jerusalem and midnight mass in Bethlehem.

I won’t spend a lot of time talking about Jerusalem as we intend to revisit most of the sights during our time here. However, one thing that I must mention is that when we visited the Church of the Holy Sepulchre, we heard some beautiful singing from the sepulchre itself. We made our way down and listened to a five voice ensemble sing a few hymns within the magnificent acoustics of the tomb. It definitely moved me to tears and gave me that Christmas spirit that I had lacked for most of the day. I was now ready for Bethlehem.

I can’t explain the anticipation that both of us have had for this event. It has been marked on our itinerary since the middle of October and we have considered it to be one of the highlights of our entire trip. I mean, think of it – this is the birthplace of Jesus Christ, our Saviour. This is our pilgrimage to where it all began. Our tour guide also instilled the importance of our privilege of being here. He related stories of how other guests have felt moved by this journey. I think that the entire bus was excited about what was to come. As Bethlehem is in Palestine, we had to pass through a security checkpoint. Rather than check our passports as we had anticipated,  a couple of Santas came on board the bus and handed out bags of chocolate. Awesome!! We also noticed as we crossed into Palestine that there were many Christmas decorations and lights that had been missing in Jerusalem. Our first stop once in Bethlehem was the obligatory souvenir shop which, I have to admit, we did partake. Small tokens, keepsakes, that we can easily carry home. Next stop – The Shepherds’ Field Chapel. This is the name given to the Catholic church that is in the area of Beit Sahur southeast of Bethlehem in the West Bank in Palestine. The chapel marks the place where the angels first announced the birth of Christ to the shepherds as they watched their flocks by night.  Under the chapel, there are a number of original shepherd’s caves. We were unable to enter the church or the caves as there were masses taking place in all of them. From there, on to Manger Square, the Church of the Nativity and midnight mass. After parking the bus, agreeing on a rendez-vous time and place, going for a quick late night supper, we were free to go to The Square. We were advised by our tour guide to go out the back door from the restaurant for better viewing opportunities. However, we came across a number of armed guards demanding tickets and were forced back into the restaurant. We luckily fell in with another group and guide who had an inside track and he led us straight to the old Nativity church.  Though the actual service was taking place in the larger church next door, we spent 15 minutes inside this church, admiring the mosaics on the walls and floors that dated back to 565 AD. Many of the group descended into the cave under the altar in which Jesus was said to have been born. It was another awe inspiring moment and one that we will not forget very soon. Once outside the church, we made a circuitous route to Manger Square (aka Bethlehem Square). I was expecting something much more reverent but Richard was not surprised to see the party atmosphere that prevailed there. We stood for a few minutes watching the large screen of the service that was taking place inside, took some pictures and regrettably noticed that it was time to make our way back to the bus. We arrived back at our lodgings safe and sound about 2 AM and tucked in for a much needed sleep.

Today is Christmas Day. There is no snow and the weather is delightful at a warm 16 degrees. There are no church bells ringing and it is business as usual in Jerusalem. We have stocked up on snacks for the day – hummus and crackers (no sour cream for chips and dip), a bottle of wine and some beer. We are missing our family, friends, turkey, mashed potatoes and gravy. Know that we are thinking of you all and miss you very much. Have a very Merry Christmas and all the best in the New Year!!

A couple pics of Jerusalem.  More to come as we do more serious tours of the Old City later this week. 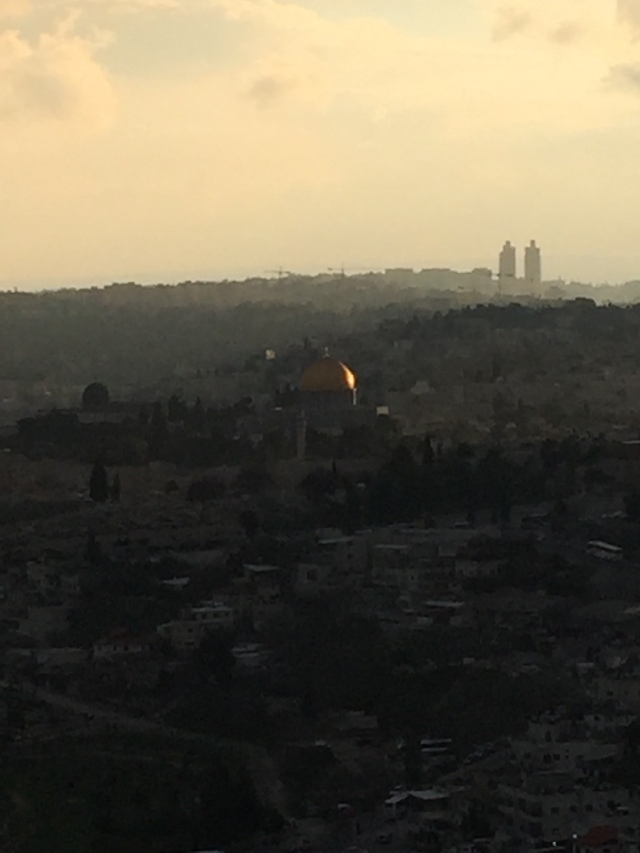 We arbitrarily wandered down a staircase in the Church of the Holy Sepulchre and this is what we came upon. 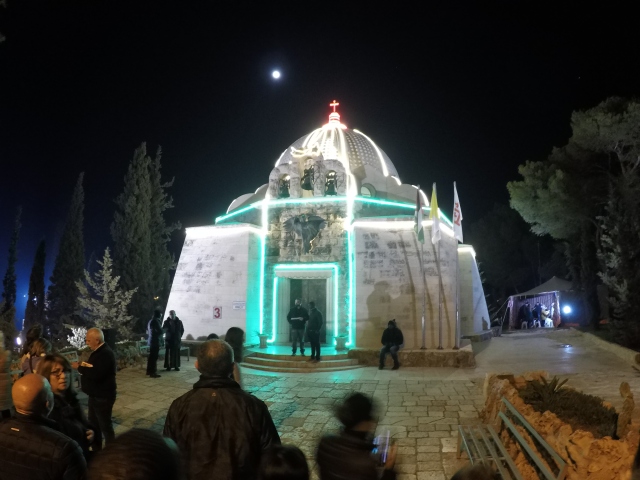 The Church of The Nativity.  The last picture is the entrance to the cave beneath the Altar which is supposed to be where Jesus was born.  I am sorry, but the skeptic in me says this may not be the exact location, but it is great for tourism.  This is Richard by the way, not Col.  She has no doubt in her mind whatsoever. 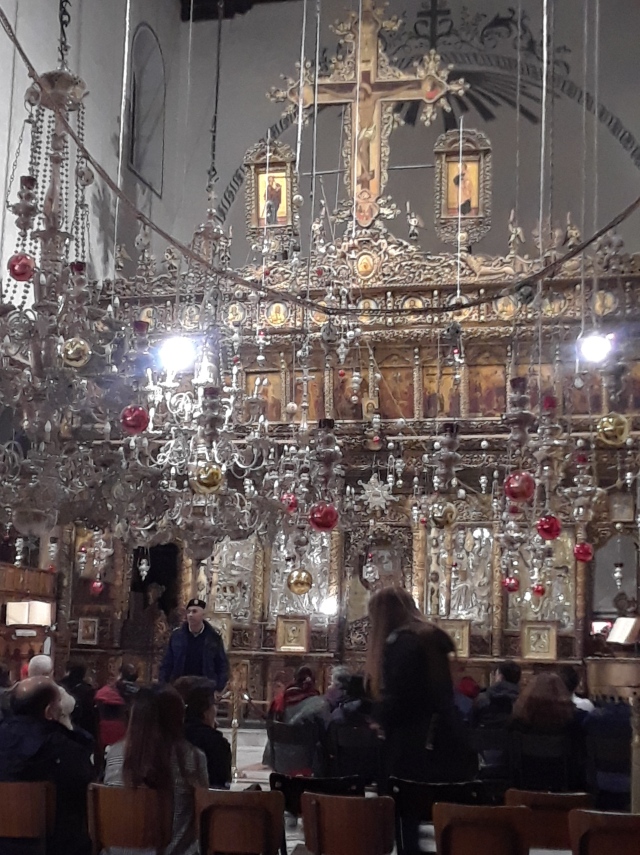 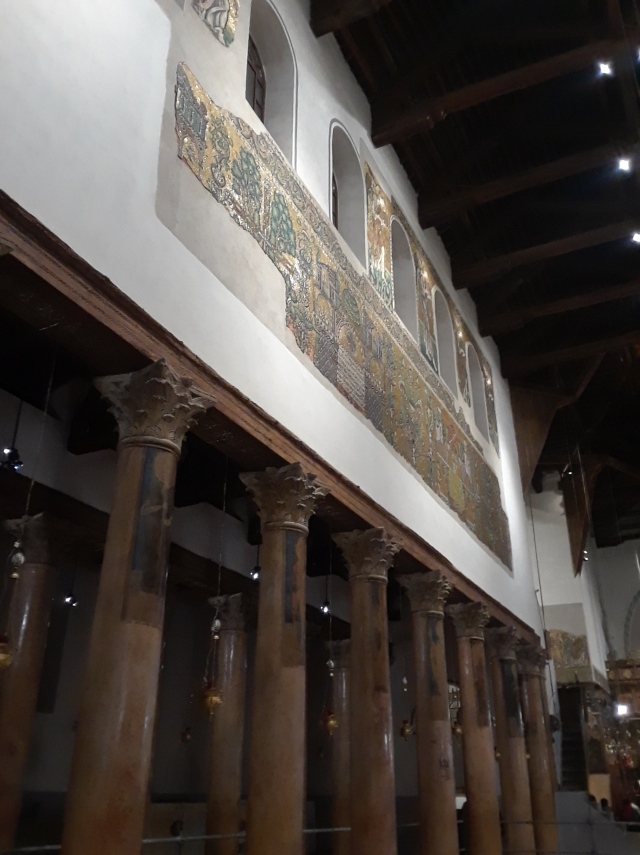 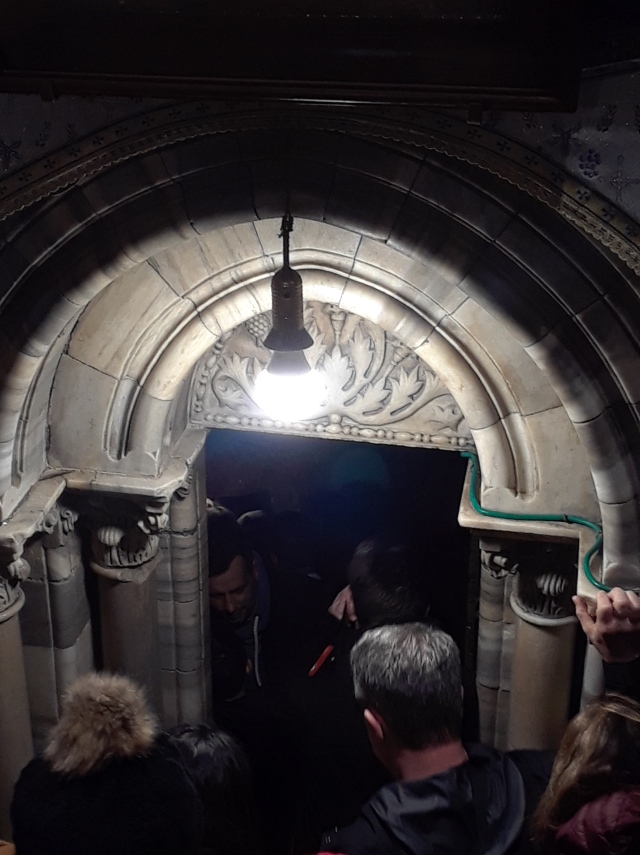 Manger Square in Bethlehem, not Manager Square as I had put on Facebook.

7 thoughts on “Merry Christmas from Jerusalem”