Tuesday, December 18 – We are cruising on the Nile. We spent the previous night on the boat and early in the AM most of our group went on an optional tour to Abu Simbel Temple. Even though this was a  “must see” event, we opted out. We had told ourselves at the beginning of this trip that we did not want this to become the Amazing Race. Rather than just racing from site to site, we want to concentrate on the experiences. So instead, we spent an hour or so walking around the town and then we relaxed on the upper sun deck of the Grand Sun. By 2:30 PM the rest of the groups were back and the boat was underway. The riverbanks boasted palm trees and other greenery while the desert sand dunes stood quietly behind them. We came upon a few small herds of cattle and horses that were grazing along the bank or herded towards the water by boys and men. The afternoon was surreal. Can we really be on the Nile sharing the history of Egyptian kings and queens,  Moses and Jesus, Cleopatra and Mark Anthony? Somedays, we cannot believe it ourselves.

We docked just after 5 PM at Kom-Ombo. We left the boat to visit the Temple and the crocodile museum. This particular temple (aptly named the Kom-Ombo Temple) is one of the only temples that was dedicated for two gods rather than just one – the falcon god Horus and the crocodile god Sobek. Again, the carvings and hieroglyphics were amazing. This is the first time we have visited a temple at night so it gave us a different perspective as well. From there, we walked a few meters to the crocodile museum to see the mummified crocodiles. It is amazing how well preserved these crocs really are. These ancient Egyptians thought of everything!!

Just a side note on this experience – since we have arrived in Egypt, we have been bombarded with people trying to sell us something, take us somewhere or pretend to just have a conversation. I say pretend because we have been caught a couple of times by folks who ask where we are from, how do we like the pyramids (temples, boat, horse, etc), offer us a free gift “just for you, my friend”. Then once we have the “gift” in our hands they now ask for a cup of coffee, or 10 American dollars, or 20 Egyptian pounds. We are getting more savvy in the ways of the Egyptians but Richard learned another lesson at the temple last night. There is a large military presence in Egypt. Everywhere you see armed guards, tanks, men in flak jackets or standing behind fortified steel shields. The temples and museums are no exception. One of the guards approached Richard as he was taking some pictures and started up a conversation. The guard told him that he could show him something else and that Richard should follow him. I questioned the sanity of following a man with a gun, but it seemed legit. That is until the guard led us through the temple to the other side and proceeded down a dark, deserted tunnel. Not sure what the original objective was, but we weren’t waiting around to find out and hightailed it out of there. It made for a good story around the dinner table that evening but it also made us aware of how careful we need to be.

Early this morning, we docked on the west bank of the Nile at Edfu in order to see the Edfu Temple. This temple is dedicated to the falcon god Horus and is considered to be one of the most beautiful and preserved Temples in Egypt. This Ptolemaic temple, built between 237 and 57 BC, was covered in sand until it was discovered in the 18th century by a French explorer. Though the temple was beautiful and the carvings mostly intact, I had a hard time enjoying it. This was because, once off the ship, the only way to the temple was by horse and carriage. Apparently, this is a monopoly and no other transport is offered. Our tour guide put us four per carriage and I was heartbroken to see these little, skinny horses being whipped by their driver to bring us up to the temple. I realize that this is a livelihood for both horse and driver but it did not make it any easier for me. I am upset that I did not speak up or refuse the ride. In the end, that would only have made me feel better as there would have been someone to gladly take my place and it would not have helped the horse. There were at least a dozen tour boats lined up at the dock to see this temple and more than 100 horse and carriages to take them there.  Once back on the boat, I had a good cry, looked up some previous comments from TripAdvisor about the horses and will add my own comments to our final review of this excursion.

The rest of today will be spent cruising and we should dock this evening in Luxor – home of the Valley of the Kings. Tomorrow is the big day!! 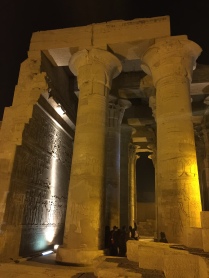 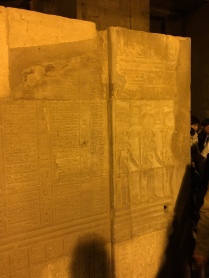 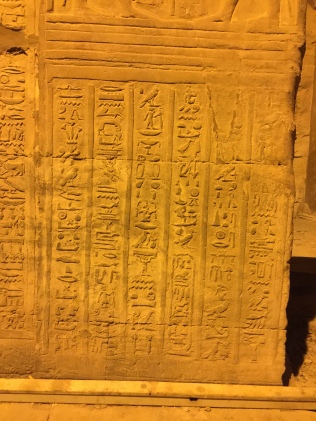 Cruising on the Nile. 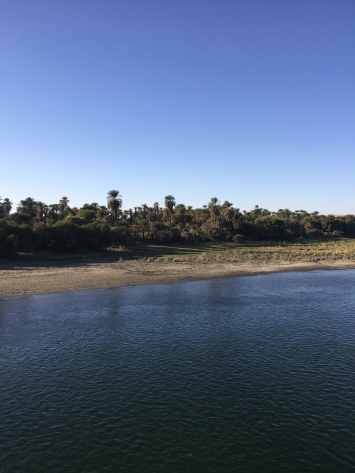 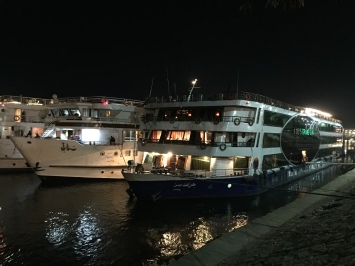 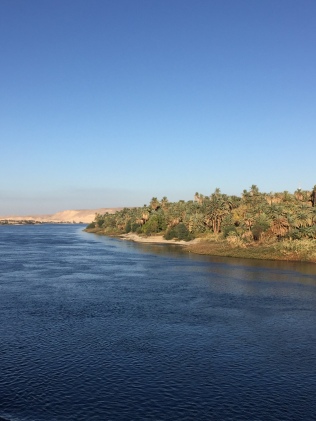 Edfu Temple, the Temple of the god Horus, the falcon god. 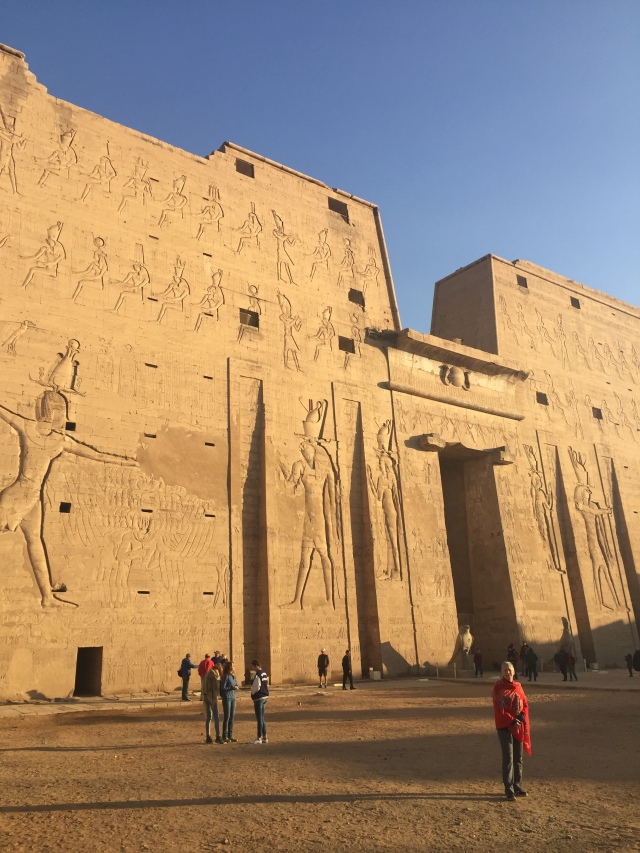 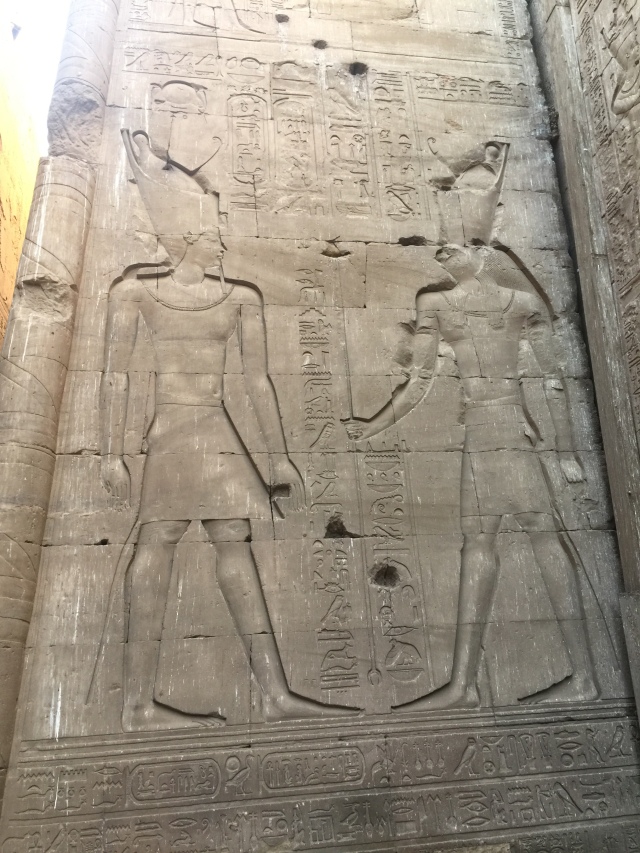 Apparently this next picture is unique in that it is the only temple in Egypt with the actual blueprint for the temple that is part of the temple.  How do we know this?  Well, again our tour guide told us it is so…. 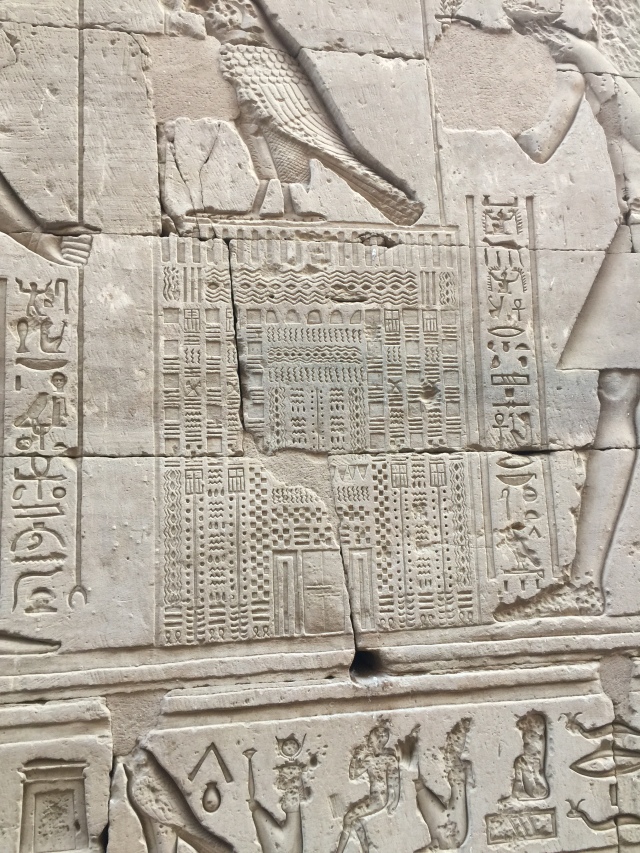 The original wall that surrounded the temple.  Most of the wall has been reconstructed, but this we are told is the real thing.  How do we know?  Well, you know the story. 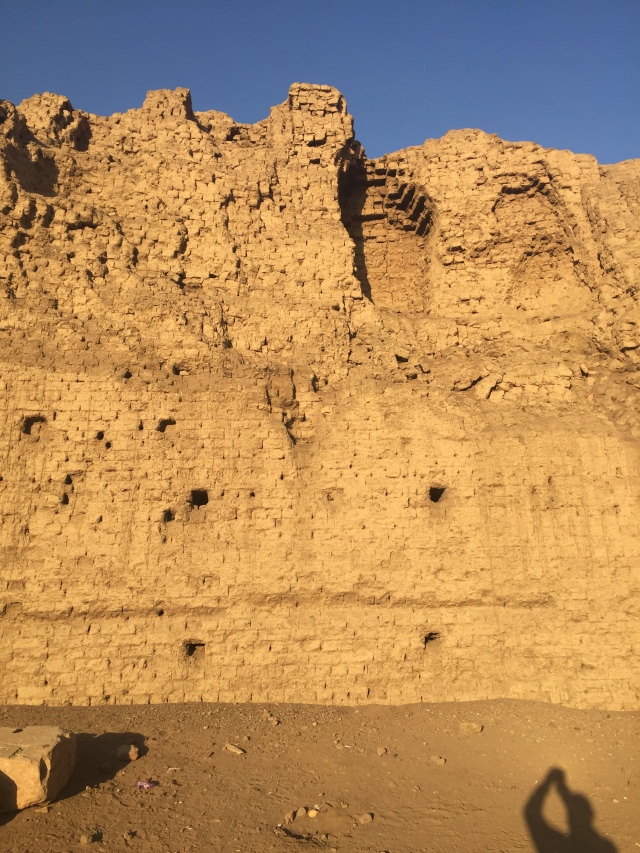 Cobras.  Over every door leading into a temple, pyramid or special place in ancient Egypt you will find two cobras protecting the premises.

Making a living.  While we were anchored this boat attached itself and was dragged for two hours or more along the Nile trying to sell items to people on the sun deck.  They would toss up rugs, blankets, etc but I am not sure if the people on the boat sent any money down.  It was quite the site to see. 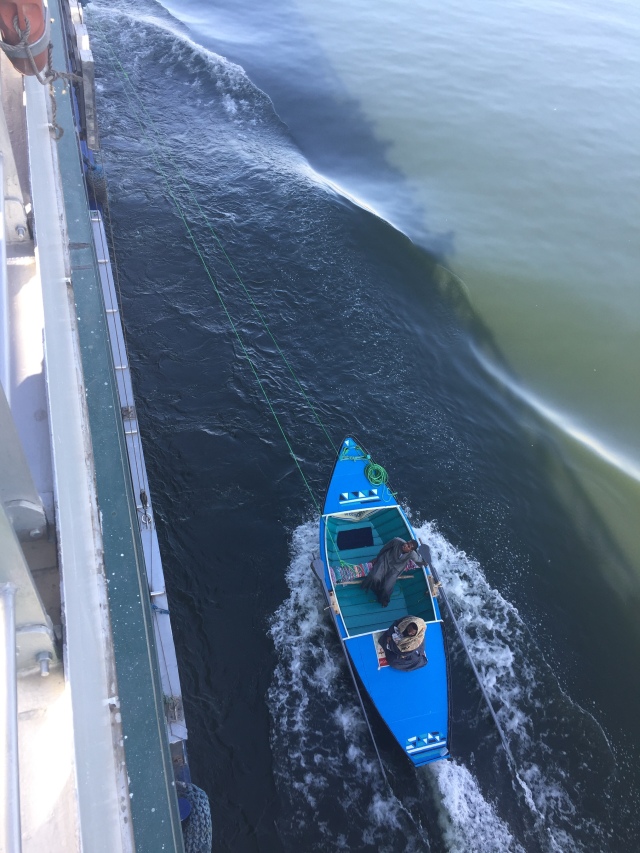