Today was our first day with our tour guide Khalid and he was at the house exactly at 7 AM to take us in his Nissan Pathfinder to the desert. The drive was a little over three hours and we wound our way through a series of mountain ranges before reaching our destination. The highway for the most part was three lane each way and Khalid informed us that it was built within the last 7 years. The villages along the highway all looked like they were built within the last 7 years as well. Buildings were clean, neat and new. We did not see much wildlife other than a few camels and some long haired goats. In fact, we came up behind a camel in a pickup truck but we were past before I could get my camera out. However, we did get lucky in the desert and got a picture of TWO camels in the back of a truck.

The desert itself was amazing!! Sand dunes everywhere. Khalid thought it was a lot of fun to go ripping over the dunes at about 60 miles per hour (that my friends is not an exaggeration as I had a clear view of the speedometer!!) and after bumping our heads a few times on the roof, we asked him to slow down for us old people. We stopped for a photo op, then at an overnight camp that was deserted for the day and then at a Bedouin dwelling where we had some dates and a cup of coffee. For the uninformed, myself included, bedouin is a generic name for a desert-dweller and is a term generally applied to Arab nomadic pastoralist groups, who are found throughout most of the desert belt of Arabia and north Africa.

Before we left the desert we came across a four wheel drive with a flat tire. We stopped to give them a hand and while the Arab men were working out a system for changing the tire, we had a pleasant conversation with the folks from the broken down vehicle. They were Italian and had been in Abu Dhabi working on a Michael Bay movie. The movie has wrapped now and they are just enjoying some R&R in Oman. Before long the tire was fixed and away they went. It wasn’t until afterwards that I realized that I had not asked what movie they were working on. I guess I’ll have to watch for a Michael Bay movie coming out in the next year or two. Maybe they were acting in it – I really have no idea.

So, out of the desert and off for some lunch. Just a quick burger and we were on our way back to Muscat. As we know, everything looks different coming from the other direction so we enjoyed the scenery just a much on the return trip.

Because we were home by midafternoon, we had the opportunity to see Elena and Cedrik play rugby. It certainly made us miss all our grandchildren at home and all the activities that were are missing with them. Know that we are thinking of you all and can’t wait to see you in June. ❤❤❤ 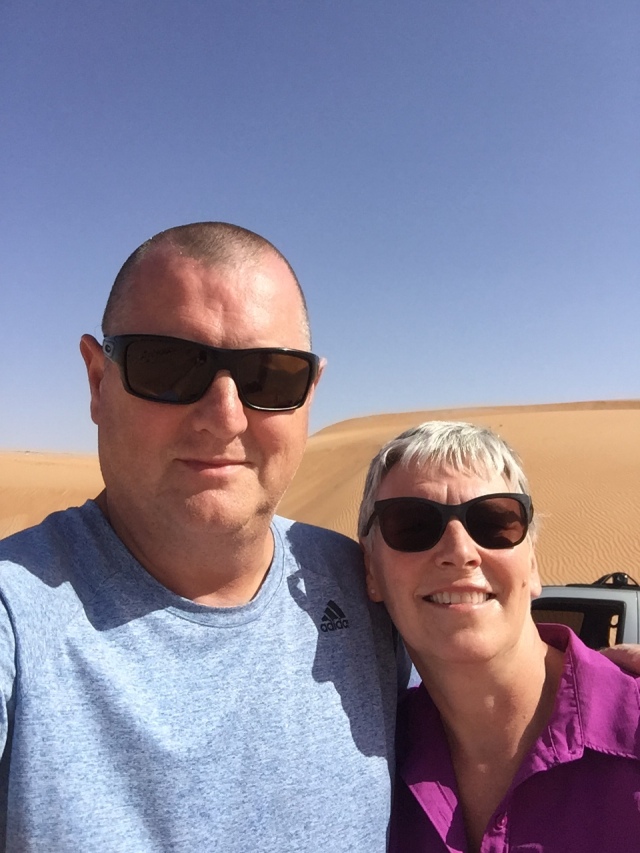 Flat tire in the Dessert.  Not a good thing and the owner of the vehicle was not very happy.

Dates and Coffee at the Bedouin encampment.

NOW this is a sight you don’t see everyday.  Well, at least where we come from.

The Dessert. Quite Amazing!!!!

3 thoughts on “Four Wheeling in the Desert”