I am not even sure how to start. After my post yesterday, Richard and I went for a little walk around our hotel. Walking in the street was taking your life into your hands. We tried to look at the shops around us but we had to keep watching out for traffic at every moment. There were many street vendors selling clothing, which included everything from suits to winter parkas. Most of the shops did sell clothing or textiles of some sort. We did find a little corner store where we were able to buy some water. We found a McDonalds and checked out the menu though we did not have anything to eat. There are no beef products on the menu – only chicken and vegetarian. We headed back to our hotel and waited in the lounge  for our group and tour guide to arrive. We have a wonderful group (I have to say that because they are all following the blog now LOL). Caroline from UK, Lisa and Louis from UK, Mick and Roe from Australia, Miriama and her son Felix from New Zealand and Naoya and Noriko from Japan. Our tour guide is AJ. I listed all their names because we will be spending the next 11 days together and I am sure that their names will come up periodically. After our tour briefing, AJ took us to a restaurant around the corner. Everyone tried something new and though the flavors are different from what we are used to, I think that everyone enjoyed it. It was a great opportunity to get to know each other within a social setting.

We started early this morning with a walking tour of Old Delhi. Though we had been briefed and we knew what we were going to see, it was the journey to get there that was the most interesting. We walked to the metro station and as it was still fairly early, the streets were not as crowded as they had been the afternoon before. About a ten minute ride on the metro took us to Old Delhi. The cacophony of cars, people, motorbikes, and horns honking assailed the ears. Oxen and horses pulling carts and walking alongside the motorized carts, bicycles and vans seemed incompatible. The smells of exhaust, street food, and garbage assaulted the nose. And AJ led us through this traffic towards the largest mosque in Delhi – Jama Masjid. This mosque was constructed in 1650–56 by the Mughal emperor Shah Jahān who was also responsible for the construction of the Taj Mahal. After taking off our shoes, we wandered around the courtyard area that holds 20,000 people for prayers. Jama Masjid is oriented toward the holy city of Mecca, Saudi Arabia, which lies to the west. 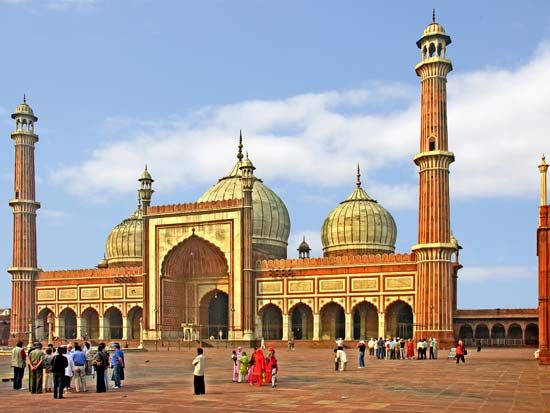 From there we walked over to Gurdwara Sis Ganj Sahib, a Sikh temple. This time we took off shoes and socks and went into the temple. We sat for a few minutes and listened to prayers to the 10 prophets. From there we walked over to the Soup Kitchen (for lack of a better description) which is attached to the temple. Here, food is prepared for 5000 people per day, free of charge. We walked through the kitchens where they were cooking lentils and making chapati (similar to a crepe) and the dining hall where they were making naan bread. Other than the bread, all food is prepared by hand. It is a huge undertaking everyday but they have many volunteers and many donors to keep this program alive.

We headed back to the metro station and then to the hotel. Funny story – At our metro stop, Lisa and I were talking and somehow did not make it out of the train before the doors closed on us. I’m sure our faces were in shock as we watched our group standing on the platform as the train, with the two of us still in it, left the station. Luckily, a young Indian man had also missed his stop and he guided us back to where we should have got off. A couple of seconds of panic but it all ended well.

So now we are waiting to board our overnight train to Varanasi. They say that you haven’t had an Indian experience until you ride the train. The group as a whole is apprehensive but I am sure that we will survive. See you in Varanasi!!

Our family for the next ten days.

The favourite or most popular beer in India is Kingfisher.

The Mosque from the outside.

Getting our headgear on the enter the Sikh Temple and inside the Temple.

The following are pictures of the area in the Sikh Temple where they prepare the food for the thousands of people they feed every day.

The temple from the outside.

One thought on “A Day in Delhi”